As most of my readers know by now, I have spent a few weeks paralyzed and unable to write anything beyond the occasional blog post. I knew most of my issue was fear: fear of not making enough this month to cover the bills, fear of sounding stupid, and a whole lot of other things. I have been unhappy with this, and, being me, I engaged in quite a bit of self-analysis. Nothing helped, however, until a few days ago. 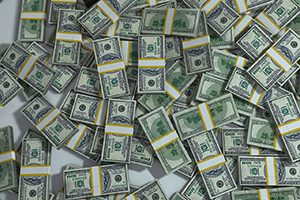 I am on the newsletter list of and in a Facebook group belonging to a writer named Holly Mortimer. Holly, like many others, teaches courses on social media marketing. She has a website, in case you are interested, that can be found here. I have signed up for a couple of her videos/Facebook Lives but have yet to make it to one. To be honest, my schedule is too crammed up with stuff to attend every webinar and videoconference that’s out there. However, I do open her newsletters and at least skim them. 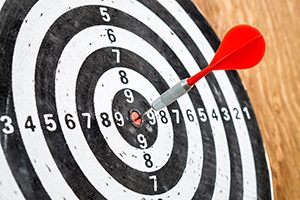 This last week, one of her newsletters had in its subject line something about being afraid of success. Now, the fear of success is something I’ve always been a bit skeptical about. I mean, seriously, who would be scared of being successful?? However, Holly Mortimer has managed to change my mind about it, and has given me a lot to consider.

Holly shared that she had not written much for months and that she read a book that helped her see that she was afraid of success. Much of what she said struck a chord with me, because I can see these things going on in my own mind and life. 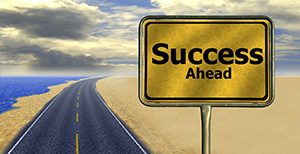 I believe I have mentioned Imposter Syndrome before. Imposter Syndrome is something that afflicts many people, including writers. It’s the belief or fear that you’re not really X, Y, or Z because you’re not as good as so-and-so. It is partly a fear that others will discover your ineptitude and lack of ability. It stems from comparing yourself to others. I had thought I had overcome this. Certainly, I remind myself often that just because others are doing A, B, or C better than I am, does not mean that I’m an imposter.

However, when I read Holly’s statement about fearing others seeing my books, I recalled something similar that went through my head right after I talked to the lady at the library about them. There are mistakes in all of them. No matter how many sets of eyes see a book, things are always missed. But I know that in Race Book 1, there is a major racing error at the end. I plan to fix it when I redo the cover, but in the meantime, any race fan who reads it will see it sticking out there like a sore thumb. I’m guessing non-race fans will, as well. My point is, though, that I thought, “I can’t share those books with her with that mistake in them! I’ll look stupid and unprofessional!”

What I realize now is that this thought came out of fear, and that the fear might be causing me to be afraid of being successful.

So, what am I doing about it? Well, for one thing, I have decided to accept that I am a success, at least in the eyes of some. I still see all the bad and little of the good. I still see that I am going to probably go three months without meeting my minimum income requirement, which means no riding mower this year. But I accept that yes, I am far more successful than some just by virtue of the fact that I am making enough to live off just my writing income.

Also, I have some more index cards. LOL Those who know me well know about my index cards. I took the three lies the enemy of my faith has been telling me—that I am lazy, that I am stupid, and that I can’t succeed as a writer—and I wrote the opposite on each card … one that says “I am smart,” one that says, “I am a hard worker,” and one that says, “I am destined to succeed.” Below each statement, I wrote a verse from the Bible that reinforces the statement. Then, on a fourth card, I wrote down something related to it that Leenie told me. Whenever one of those negative thoughts comes into my head, I read the statements and the verses aloud, which reminds me that I am not a failure. 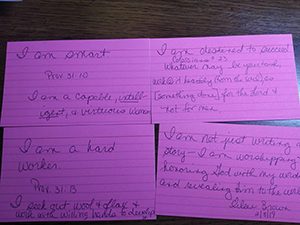 It will take time for me to turn my thinking around, but with practice, the voices in my head will change what they are saying. Increased success will follow. As long as I can be confident without being cocky, I’m happy.  🙂