When I went full time as a writer, one of the pieces of advice I heard was to have multiple streams of income. At first, I wasn’t sure what was meant by that, but as I listened and observed more, I began to understand.

I have multiple streams of income, but most are small amounts. For example, I have an eight-book bundle at Kobo that I recently raised the price on. It started at $19.99, but I jacked it up to $24.99. Few people buy it, but when they do, the royalty off that one book equals two and a half or three of my other books (in some cases four or five).

I also have an Amazon affiliate account. I earn enough for a payout, which is $10 or more, every couple of months.

Of course, I have ebooks and print books. I added large print last year, too. That’s three streams of income right there, with ebooks making the biggest percent and large print the smallest.

I also use my writing to earn money in other ways. I write web posts for an attorney, and I recently took on a ghostwriting project. Before anyone’s knickers get in a twist over that, I was not asked to plagiarize anything and what I wrote was 100% my words. It was not the most enjoyable thing in the world, though I did eventually get really into the characters and the story, just like I do with my own books. It also did not pay much compared to the amount of work involved, so it’s not something I’m going to do regularly. But, it is a legitimate stream of income, and I know that if I had to, I could make a living at that. 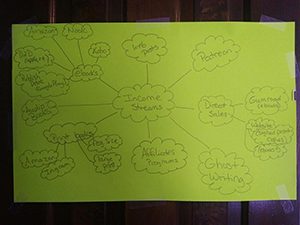 Last fall, I was inspired by Joanna Penn at The Creative Penn to create a poster of my sources of income. I’ve added it to this post, because I’m kind of proud of it. 🙂

Anyway, though I scoffed at the idea at first, those additional streams of income, which include Patreon and Gumroad as well as the stuff I mentioned above, really add up! Often, they are the difference between me making enough money to meet my expenses for the month and not making them.

Do you have multiple streams of income? Have they made a big difference in your bottom line?