This week’s post was rather exciting for me to write, in large part because I love organizers and foldy things and planning things, especially when they’re pretty! <3

I’ve said before that I love planners. I love looking at them on Pinterest, as well as those of my friends, I love using one, and I love decorating them, though I rarely have time for that now. 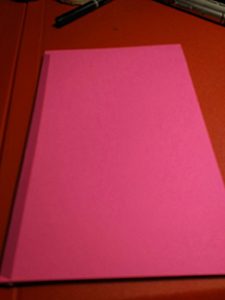 A completed portable plotting notebook waiting for a story to fill it.

Recently, I viewed a video that Leenie shared in her PD For Writers Like Me Facebook group. The group is sort of a journal of her professional development experiences. The video I viewed was about turning an old, outdated Happy Planner into a plotting notebook.

The lady who did the video is Sarra Cannon, and her YouTube channel is called Heart Breathings. She also has a blog by the same name.

Anyway, as I was watching the plotting notebook video, I noticed that the next one in line was for a portable plotting notebook. I impatiently sat through the rest of the Happy Planner video, because … planner, and then immediately began the portable notebook one.

I will say this before I continue … I was impressed with the Happy Planner conversion thing. I’m not terribly creative like that; I always have to get my ideas from someone else, though once I have the ideas, I am perfectly capable of altering them to fit my needs and wants. How I manage to write decent books is a mystery. LOL This is why I always say my stories came from God, because I can’t think this stuff up on my own. 😀

Back to the second video … Ms. Cannon took large, blank index cards and washi tape and made little notebooks. Then, she showed us how she uses them – what categories she uses and where she puts stuff. I was inspired! 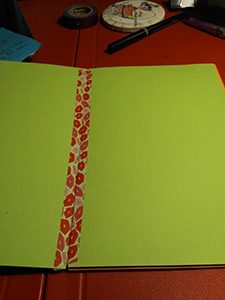 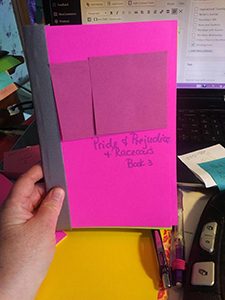 The first one I made was for race book three, which is posting here on my Austen Promises blog on Fridays. As you can see from the picture, it did not turn out well. Since all I had was colored cardstock, I used it instead. I miscounted the number of sheets I’d need for each section and, combined with cardstock being heavier than index cards, ended up using duct tape on the outside to hold it together. Not purple duct tape either! 🙁 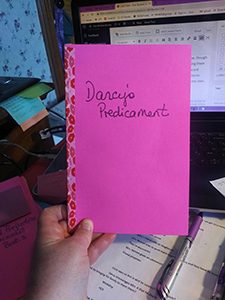 Darcy’s Predicament notebook. I did much better with this one! 🙂

The second one was better. I made it for Darcy’s Predicament, which is posting on my blog on Thursdays in excerpts and on Patreon in whole chapters. This one turned out much better. It’s still not perfect, but it is better! LOL

I made another one so I could take pictures for this blog post. I have no story to go in it as of yet, but it can wait until then. LOL There will be a fourth one, because I intend to make a video for my $10 patrons that shows how I make them. 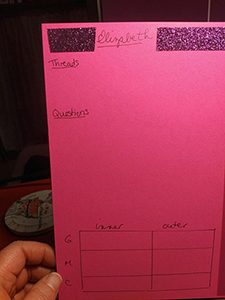 I’m not sure I’m putting stuff in it the same as Ms. Cannon did in her video, but I know that I can personalize it how I like. If she had shown what the inside looks like, I’d have known, but she needed to not share spoilers in case any of her viewers were fans of her books. I totally understand that! 😀

At any rate, I’m putting my plot structure in three times … once for Elizabeth, once for Darcy, and once for the antagonist (in the Darcy’s Predicament book). The reason I have set it up this way is that Darcy and Elizabeth get together quickly, but Mrs. Bennet puts roadblocks in their way. That makes her an antagonist. In other books, I might not do it that way. It’s got one more section than Ms. Cannon has in hers and it does tend to make it more bulky when you’re using cardstock. LOL

And, by the time I have written that plot out three times, I’ve got it pretty well stuck in my head! LOL

The Heart Breathings blog and YouTube channel have more than just planner stuff on them. She has tons of videos about writing and the business of it. If you’re a writer, especially if you could use some inspiration, check it out.