Clicking on the images will take you to that item, not at Amazon this time, but at another website, or within my site.

In my book, Darcy’s Bodie Mine, Lizzy Bennet spends a large part of the story working in a saloon in Bodie, California, a town in the middle of a gold rush in 1880 or so. Lizzy was a singer, and not an actual saloon girl, but her friend, Charlotte Lucas was a saloon girl, though at a different saloon. 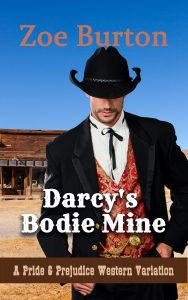 When the singer finished her last song, she rose gracefully from her seat in front of the piano and curtseyed to the crowd. She moved to the side of the sage and stepped down to mingle with the men and women in the saloon. Though she was pawed and propositioned by several men, she turned each away with a smile and a few words.

Will had listened to Higgins’ commentary about the singer from the moment she stepped onto the stage, as he identified her—Elizabeth Bennet was her name—and listed every detail that he knew, and Will suspected, many he made up as he went. Now, as the lady was approaching, the mine’s manager distracted him again.

“You ought to introduce yourself to her. She wants nothing to do with a working man like me, but you’re high-falutin’ enough that she’ll be putty in your hands.” Higgins eyed him up and down. “Besides, you need a good woman at your side, what with inheriting your father’s businesses and all. She’s pretty enough to take easily to your bed, and got enough wits about her to play hostess to anyone you do business with.”

Will glanced over his shoulder at Miss Bennet, Higgins’ words ringing in his ears. When he saw that he had caught her eye, he turned back. “She’s pretty, but not good-looking enough to tempt me. I’ve no doubt she sells herself to every man that asks; I’m not wasting my time with a saloon girl.”

Higgins rolled his eyes. “For a smart man, you’re not very wise.” He turned and walked away, leaving Will to wonder what he meant.

Elizabeth Bennet, Lizzy to her family, was as angry as she had ever been in her life. Still, she smiled gracefully at those around her as she worked her way through the room.

While she was singing, Lizzy had noticed the tall, handsome gentleman at a table at the back of the room. Judging by his clothing, he was not a miner, though the red-headed man beside him obviously was. Lizzy was interested in the tall man and thought she might seek an introduction after her set. As usual, when she took a break from singing, she mingled in the crowd, working her way to the back where he was.

Lizzy was no more than six feet away when the gentleman she was seeking caught her eye. She wondered why he turned away again, but his words, which she clearly heard, told her everything she needed to know about the man.

Given how much she despised singing in this saloon, to hear someone disparage her as the tall man had sent Lizzy’s ire spiraling. Well, she thought, handsome is as handsome does. I guess I don’t want to know him, either. Though her words to herself were full of angry bravado, the idea that this, the most handsome man she had ever seen, thought her displeasing cut deep. Still, she refused to show anyone that her feelings were hurt. She moved in another direction, going through the motions before getting back on the stage and singing another set.

At the end of the night, Lizzy walked home, to a boardinghouse on Green Street. As she approached the wood-clad house in the dim light of early morning, she reminisced about the beautiful neighborhood she had grown up in, with its large, brick and stone homes. The boardinghouse was small but tidy, and, comparatively plain.

Climbing up the steps, Lizzy wearily opened the door. Inside, in the dining room, were two other girls who lived in the house. One was another saloon girl; the other worked at the biggest hotel in town, Bodie House, doing housekeeping and cooking. Like Lizzy, the pair were on their own, separated from their families by miles and attitude.

Charlotte Lucas worked at the Bonanza Saloon, on the other side of town from where Lizzy worked. A few years older than Lizzy, Charlotte had a no-nonsense attitude that served her well in her job. Her family—parents and four siblings—had been killed in an attack by Indians five years earlier, at the family’s farm north of Texas. Charlotte had not been home at the time of the attack. She had traveled to a friend’s house a week earlier for a visit. She arrived home to find the local sheriff waiting for her, to tell her the bad news. Ever since, Charlotte had traveled from saloon to saloon, making her way further west. 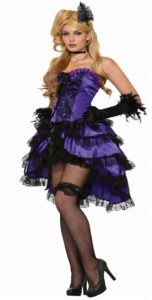 I am a fan of old Western movies and television shows, so I had a good idea of what a saloon girl might have worn. The outfits are skimpy, which makes sense given what a saloon girl was often supposed to do. They also seemed to mostly be red. I’m not sure why, though I know cities had “red light districts” that were areas with a lot of brothels and stuff. Perhaps red is the color of sex? I don’t know.

At any rate, seeing as how purple is my favorite color and Darcy’s Bodie Mine is one of my favorite books, I wanted to see what a purple saloon girl outfit would look like, so I did a Google search. I was blown away by the options!

One of them was found in two places, Wal-Mart and a place called Wonder Costumes.  I love the frilliness of it, and the purple is rich and deep. If I were not shaped the way I am, I’d love to own this one.

This one is my second favorite. I love the way the skirt hangs so low in the back, and the contrast between the purple and black. Neither this one nor the one above is too revealing, in my opinion. That’s important to me. 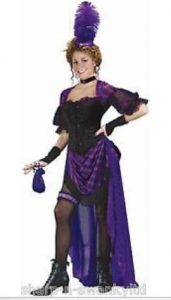 I found one that was Plus Size, too! This one is not as darkly purple or as sexy, but it does look like a saloon girl outfit, so it works. Of course, it only comes in XXL. :/

What do you think? Which one would you put Lizzy in? What about Charlotte?