Disclaimer: This post contains two affiliate links. It WILL cost you nothing to click on them, but to do so may gain me a small REMUNERATION. The links are clearly marked.

I was at one of the forums the other day, heading to their Looking for a Story thread, when I was reminded that they have another thread in a separate section about strange Austen-related items. It occurs to me that some folks might think that’s where I’m getting my ideas, but I assure you, that’s not the case, at least not at this point. I did an Amazon search to come up with the items I laid out for the rest of the year. Plus, since I didn’t get a post written last week, I now have one idea I can use in 2021! LOL

Anyway, one of the cute things I found in my search a couple weeks ago was coasters. Here is the Google search results page. The first two hits are for Amazon and Etsy. I’ll show those later. For now, I want to give attention to some other places. 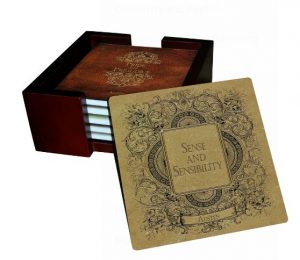 The first set I want to show you is made of tile. It’s a six-piece set, which means it should have one coaster for every Austen novel. They’re a little pricey at $35, but the description reminds us that there are two coasters more than is found in a standard set and the design is, apparently, exclusive.

The second set of coasters is from CafePress, and it’s not actually a set. They have a page here of nothing but single coaster designs made by various people. There are so many choices here that I’m not sure I can choose just one. All are currently (as of this writing) $10.39 each, which means to have even a regular set, you’ll be paying $41.56. It kind of makes the first set look like a bargain. LOL

Now we’ll go look at what Etsy has. Imagine my surprise to find the same six-coaster set made by the same folks as the first set I described here for $22.50 instead of $35! Makes me give them the side-eye, you know? Ohhhh, you know what? They are selling them without the little box for the cheaper price and with the box for the same price as their own website. That makes sense, and I withdraw my side-eye. 😀 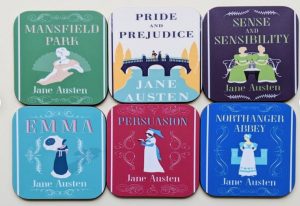 Anyway, I love color and it was hard to choose a set here, the same as it was at CafePress. However, I settled on this set. It seems to be sort of a mid-priced set and it pops, so to speak.

You’ll note that the Etsy sets are more than just square. Some are round, and some are single coasters just like at CafePress. There’s a whole lot of variety here.

Finally, we come to Amazon. Here is the page for search results. (affiliate link) I can’t find the set that originally caught my eye here, though. That’s a bummer, too. L Instead of the one I wanted to share with you, I chose this set. (affiliate link) It’s made by the same people who made the tile set I first mentioned, but it’s cheaper. I chose it because I thought the little organizer thing they go in is cute.

What’s funny about coasters is that I rarely use them. I have one here in the office and that’s about the only one. I had some made a few years ago but gave them all away. *shrug* Maybe I’ll make some more in the future. LOL