Clicking on some of the links will take you to Amazon. I am an Amazon affiliate and while clicking the links won’t cost you anything, it might give me a small payment. (There’s only one of these this week.) 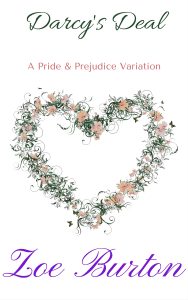 Hours later, Lord Winthrop entered his wife’s dressing room as her maid was putting the finishing touches on her hair. They were going out this evening to the home of a friend.

“You look lovely, my dear,” he spoke to her as he seated himself in a comfortable chair to wait.

“Thank you, Robert.” Rebecca Cook smiled at her husband. He really was the sweetest gentleman she had ever known. She had thought so five and twenty years before upon their first introduction, when he was still a Viscount, and he had given her no reason to change that opinion in the years since.

“I speak only the truth, my love.” He paused, then continued. “I believe I have found a solution to Elizabeth’s problem.”

“I believe so. You remember, of course, that I was to meet with Matlock today at the club?” He waited for his wife’s nod. “I recalled while I listened to him talk that his nephew, Darcy, was on the hunt for a wife this season, so I asked him about it. Turns out the young man has given up the chase and has asked Matlock to arrange a marriage for him.”

“You think to offer him our girl?”

“I do, and I did. He wanted to know details about her, of course, and insists on meeting her before he puts forth the idea to Darcy, but he wants my vote on his bill. I could almost see the wheels in his brain turning.”

“Really? Did he seem eager?” When her husband nodded, she asked, “Did he give a reason for his desire to meet her ahead of time?”

“From what I have heard of Darcy, he probably wants a wife with a brain, which of course, our goddaughter has.”

“And what of the small dowry?”

“I had thought to add to it, sweeten the pot as it were. There is no earthly reason Elizabeth should have to suffer a lack of any kind simply because her mother dislikes her and her father is indolent.”

“I like that idea, Robert! Now, how do we get Elizabeth to agree? She has always wanted to marry for love.”

“I think, after our talk the other day, that she will be amenable to marry with only compatibility. And, if we can get them married without Darcy meeting her mother, all the better. I will warn him, though,” he added with his hand in the air when his Rebecca began to protest. “It would be dishonest not to. If Darcy is as honorable as his father was, he may even wish to meet them.”

“What shall we do in that case?”

“I will explain the situation fully and offer to allow him to avoid it. Bennet gave me guardianship; technically, that makes it my responsibility in any case.” Lord Winthrop shrugged. “He will be committed at that point, regardless.”

“True, dear husband.” She rose and held out her hands to him. “I leave it in your very capable hands. Shall we go, then?”

Winthrop, having risen himself, leaned down to softly kiss her lips before leading her from the room.

I’ve always wanted a dressing table. I love the delicacy and femininity of them, even though I was always a tomboy and am less dainty and more bull-in-a-china-shop-ish. I have room for one, I think. I could make room if I don’t. It’s not like I ever get into my falling-apart cedar chest. I could move that to the guest room and put the vanity over there. 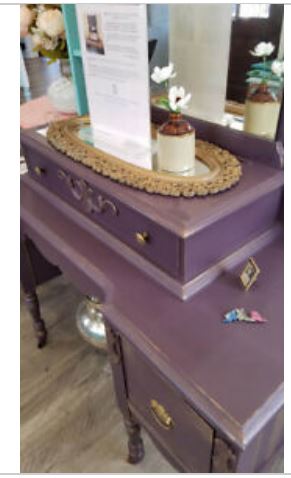 Anyway, when I read this part of the story, I wondered if purple vanities are a thing. Turns out, they are, to my utter delight! <3

I started with a Google search, as I often do. It looks at first glance, when you peruse the pictures at the top, that most purple dressing tables are for kids. This really doesn’t surprise me. It seems that most manufacturers think children are the only ones who want stuff with bold colors. Of course, they’re mistaken. 😉

This listing from EBay was the first thing I clicked on. Most of these are, sadly, for kids, but there is this one adult vanity. I like it, but it’s not as fancy as I might wish for. Also, it’s “vintage” but painted purple. I’m of two minds about this. As a lover of antiques, I hate to see anything old painted over, even if it’s purple. On the other hand … purple. It’s also nearly $1,300 and therefore WAY out of my price range. LOL

The second one is from Wal-Mart. Being that it is a Wal-Mart product, it requires assembly and is rather plain. However, it is purple and is an acceptable alternative. It has good ratings, mostly four and five stars. At $97, the price isn’t terrible. I wouldn’t mind having it, but I’d probably hold out for something nicer. 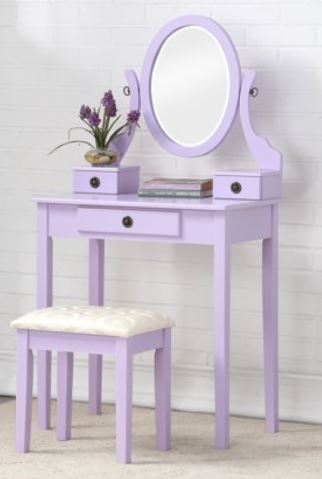 I found the same exact vanity for the same exact price at Amazon that I found at Wal-Mart. It’s the only actual purple vanity that showed up in the search. (affiliate link) I thought I’d get more results from the world’s largest online retailer, but I’m left rather disappointed. Never fear … I’ll get over it, and far sooner than I maybe ought to. 😉 LOL

What do you think? Do you have a vanity? Is it a fancy one, or simply styled? Is it plain wood or painted. Feel free to leave me a comment about it! <3