Last week, I wrote about purple ties. A little voice inside me suggested I write about cravats first, after all, I do write Regency JAFF. However, I had already begun the article, so I wrote the idea down in today’s slot and moved on. Now, here we are, discussing purple cravats and I’m rather excited about it! LOL Here’s a scene from my book, Darcy’s Wife Search, for inspiration. 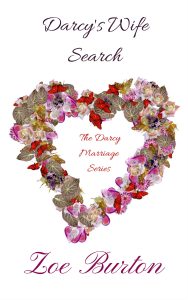 Friday evening, Darcy’s valet, Mr. Smith, bit back an exclamation of irritation with his master. Never, in all the years in the gentleman’s employ, had Smith seen such pernickety behavior from the normally stoic Mr. Darcy. His coat was not good enough, did he not have another? His cravat was crooked. His hair was too wild. On and on the complaints went. Smith was amused, at first. In general, his employer, though fastidious about his appearance, kept his opinions to himself as long as the valet was meticulous in his work. The only thing Smith could think of that would cause such a change was a woman. It did not take long, however, for Darcy’s choosiness to become annoying. Finally, after what felt to the servant like forever, the master was happy with his appearance. Smith had never been so pleased to see the back of someone in his entire life.

Darcy was unaware of the difference in his behavior. He knew himself to be looking forward to the evening, more than he had looked forward to an evening out in a long time. It was not until he and his carriage were nearly to Gracechurch Street that Darcy realized that his excitement was manifesting itself physically. He had removed his gloves upon entering the vehicle and had proceeded to twist them into an almost unrecognizable mess. Calm yourself, man. It is just an evening out with friends. Nothing to become overwrought about.

When the equipage finally stopped, and the groom opened the door, Darcy stepped out and stood staring at the door to the house. Suddenly and unaccountably apprehensive, he began to wonder if he should turn around and re-board the carriage when a servant opened the home’s door. Swallowing his sudden nerves, Darcy climbed the steps and entered the building.

Seeing Gardiner’s smiling face greeting him in the drawing room went a long way toward relieving Darcy’s emotions. He returned the man’s smile with one of his own as they exchanged salutations. Bowing to Mrs. Gardiner and taking a seat while he waited for the young ladies, Darcy began to relax.

Google wanted to add “wedding” to my search results, so apparently, that’s when guys wear purple cravats. I deleted that word, instead searching “purple cravats” and this is what I found. It looks like there are lots and lots of places to buy them, which made me very happy. 🙂 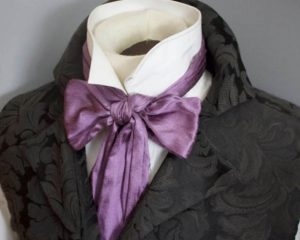 The first option under the ads and images was Etsy. This is the search results page and let me tell you, there are a whole lotta purple cravats goin’ on ‘round there! There’s a plethora of different sizes, shapes, and shades of purple in the cravats they offer. And knots! There are a bunch of different knots. It’s like Beau Brummel himself is running the place! <3 As a matter of fact, he’s represented right here! Now, I don’t know if that’s a knot he made famous. It looks rather simple to me, and I had thought he was into complicated. Still, I can’t resist the name of it, in combination with the color.

Next, I looked at a site for a store called DQT. This store is based in the UK, so prices will be different for US buyers, given the exchange rate. Also, they clearly use “cravat” over there to mean “tie” because all the options on the page appear to be regular ties. Here’s a link to the store’s page.

The Cravat Club, also in the UK, has cravats that look like cravats. Here’s the search results page. Not all are purple, of course. I like the one with the skulls (Diablo) just because of the color and the incongruity of a fancy cravat having skulls on it. LOL 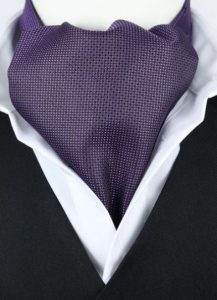 Lastly, I looked at threadpepper.com. This site originally came up as GBP and I changed it to USD, so you can buy there using several currencies. This site has “day cravats,” also known as ascots. They have many lovely purple options. This one is my favorite, because it’s dark purple and though it has dots, you can’t really see them from a distance.

So, what do you think? Do you have a favorite?