Warning: This post has a single Amazon affiliate’s link. The link is clearly marked and costs you nothing if you click on it. I many, however, get paid a few pennies if you do.

Today’s purple items were inspired by the following excerpt from Lady Catherine Impedes. 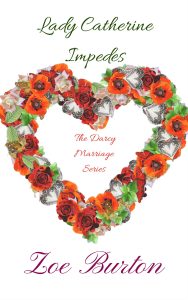 Anne’s fury was beyond anything the three gentlemen had ever seen. In the end, to keep her away from Lady Catherine and prevent more violence, Richard tackled his cousin, and he and his brother simply sat on her to hold her down until her emotions tired her out.

Her voice now hoarse from screeching innumerable invectives at her cousins, uncle, and mother, and her body weakened from the aftermath of her anger, Anne finally lay silent. Richard and the Viscount slowly rose from their positions to stand beside her, looking down at her. Lord Matlock motioned to the servants who had filled one end of the room to assist his niece up to her chambers.

Once Anne was on her way upstairs and the rest of the servants dismissed to their duties, the family assessed the damages. Lady Catherine was being attended by her maid, who had brought slivers of ice in a cloth to press on her mistress’ face. Lord Matlock sat on a chair, leaned forward with a handkerchief held to his nose. Miraculously, no furniture had been overturned. The earl removed the cloth from his face to check for further bleeding and, finding none, he leaned back in his seat.

“Well, boys, I think your aunt was correct.”

“Of course I was correct! Do you think I would lie to you about something like this?”

“No, no, Catherine; you would not, and I know this. I guess I simply did not understand the magnitude of the problem. Now that I do, we can take steps to protect you.”

“My staff, as well. They have endured much to retain their employment.”

“Yes, your staff, as well. I believe the first step must be to set a guard outside of Anne’s rooms, as we did when we arrived. I doubt she stirs for a while, so we have time to instruct the footmen and attend to our own needs.” Lord Matlock was creating a list in his mind of the next steps he should take.

“We need to decide how to approach Anne, do you not think, Father?” Richard, as a military man, comprehended the need to thoroughly understand the plan of approach for any battle. After the scene he just witnessed, it was clear to him that making his cousin see reason was going to be just that—a battle.

Tansley contributed his two pence to the discussion. “I would suggest bringing in the physician to prescribe a course of medicines to calm her…laudanum and the like.”

“I am not certain we want her dependent upon laudanum. We all know individuals who are; such a thing might make Anne’s behavior worse. However, I do see a need for sedation, at least some of the time. Were she younger, we could get away with hiring a governess to teach her how to behave.”

“Why can we not still do it?” Tansley rushed to defend his idea when his father scoffed. “Anne obviously needs more than Mrs. Jenkinson, who is far too timid, in my opinion. We can replace her with someone who has a more forceful personality, who can withstand tantrums. We will assign one of the guards we set over her to be a sort of minder; he can be with them or nearby at all times, and when my cousin behaves badly, he can step in to restrain her.” 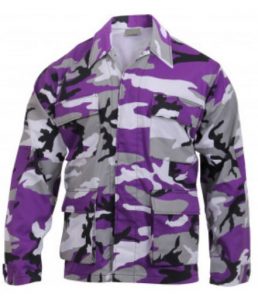 This was one of the more difficult searches I’ve undertaken. A search for “purple military uniforms” brings up a whole bunch of stuff not directly related. I had to get a bit creative this time. LOL

Here is the search results page from Google. This time, the top link was to a Wikipedia article, instead of a link to Amazon. I had to scroll down a bit to find what I was actually looking for. Eventually, I clicked on an image along the right, in the shopping links.

I did find Amazon’s link, about five links down. This is the military uniform shirt/jacket I found. (affiliate link) It’s unavailable for purchase. I don’t know if it’s really out of stock or if it’s not available due to the Covid-19 thing. I really like that jacket, and I’d love to have one of my own, if it was permissible. It must be; lots of people wear camo in all colors nowadays, not just military.

Thankfully, it can be purchased at this link, from a site called Army Universe. I’d have to get a 2X size, which costs a couple dollars more, and it would only fit me if it were a kind of loose men’s fit. I guess I might need to shelve this want for a while. LOL 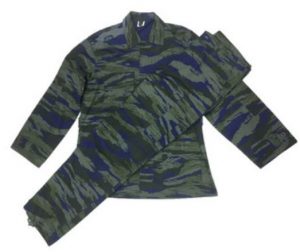 The other purple military uniform I found was this one. The site name is Alibaba.com, which frankly makes me a bit nervous. Anyway, after some serious squinting, I did see a bit of purple in the dark bits. THEN, I noticed the manufacturer name … Wuhan Jinteng Manufacturing. Wuhan is where Covid-19 came from. No, thank you; I’ll pass.

I did find this pair of purple camo cargo pants at the Army Universe site. Those do come in 3X, but if they’re men’s, I might be able to wear a 2X. Doubtful, but possible. A 2X is $2 more, and a 3X is $4 more. That kind of makes them a bit pricier than I’m willing to go, anyway.

The problem with searching for clothing items is it highlights my weight problem. LOL

Would you wear purple camo or a purple uniform? Did you see anything I listed you liked?