I have to tell you I’m pretty excited about today’s purple post. 😀 It was inspired by the following excerpt from Caroline’s Censure. 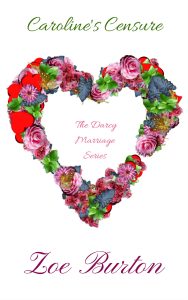 “Miss Caroline Bingley, sir.” Bowing, the man stepped out of the way as Bingley’s sister swept in.

Stopping in the center of the room, she spoke. “Charles, what have you done? You have not purchased this hovel, have you, and wasted our father’s money?”

Elizabeth Darcy’s wide eyes sought out her husband’s as they rose to greet the newest visitor to Netherfield Park. The Darcys were newly-married, and had spent the previous few weeks visiting the estate, which was being leased by Fitzwilliam Darcy’s friend, Charles Bingley. Bingley’s sister, Caroline, had just sauntered in, unexpectedly and with derogatory comments to her brother about the house.

Darcy returned his wife’s look with a roll of his eyes. While Elizabeth had never met Bingley’s sister, Darcy had been avoiding her since almost the moment they became acquainted. Her current unpleasantly dramatic entrance, typical behavior on her part, was the reason. That, and the fact that she quite obviously set her cap at him the first time she met him. He wondered why she was here now, given what he knew about her current circumstances. Darcy reached for Elizabeth’s hand, laying it on his arm and squeezing it. If it were not the height of rudeness, he would seat them both; they ought to be comfortable while they enjoyed what was certain to be a spectacular performance from Caroline Bingley.

“Caroline, what are you doing here? Why are you not in Yorkshire?”

“Can a sister not visit her brother? I read your letter describing Netherfield and knew I must see the place for myself.”

“With no warning? How do you know I have a room for you?” Bingley shook his head. “Seriously, Caroline, if this were your home and someone did that, you would be angry. In any event, we will have to discuss it later. Come, greet the Darcys.” He gestured to the group of chairs and couches clustered in the center of the room.

Caroline’s sharp eyes had not missed that her brother’s guests were his friend and his friend’s sister. The other two were unknown to her, but based on her mode of dress, one was probably Georgiana Darcy’s companion. The other, Caroline could not begin to speculate on, but she could not like the way the ugly little thing stood so close to Darcy. Surely that is not his new wife? Why, there is not a fine feature in her face! I will put a stop to that immediately.

“I see them standing there! Mr. Darcy,” Caroline cooed, approaching him with a gleam in her eye as her hands reached out to clasp his unoccupied arm. “It is so good to see you again.”

Disengaging his arm from Caroline’s clutches, Darcy returned her greeting. He turned toward Elizabeth, intending to introduce her to Bingley’s sister, when Caroline interrupted.

“And Miss Darcy! My, how you have grown since last I saw you! I am delighted you are here! We shall have a merry time together!”

Georgiana Darcy blushed at Caroline’s rudeness, and her fawning. She was not confident enough to say what she liked…that she doubted they would have a good time and she was eager to see Caroline’s face when Elizabeth was introduced…so she simply smiled and nodded. With luck, she will turn her embarrassing attention elsewhere. When it became obvious that Caroline was going to continue speaking instead of asking for introductions to the ladies in the room that she did not know, Georgiana gathered her courage and, blushing, blurted out, “May I introduce you to Mrs. Annesley? She is my companion; she came to me a few months ago.”

Not one to miss the opportunity to ingratiate herself with someone of higher standing, even if it meant acknowledging that person’s servant, Caroline fixed a smile on her face and greeted her newest acquaintance before turning her attention back to Darcy.

“Mr. Darcy,” she began as she settled herself into the nearest sofa. “Come, sit here; tell me how you have been.”

Darcy’s mien, always serious, took on a harsher cast as his anger grew at Caroline’s slight of his wife. He opened his mouth to speak but shut it again when his friend spoke to Caroline.

“I am amazed at your rudeness, Sister. You sit as though there is no one else in the room to whom you need an introduction.” Bingley stepped from his position in the center of the room to stand on the other side of Elizabeth from Darcy. His position was as symbolic as it was practical. He had been out from under his sister’s thumb for months and had found the time apart rather freeing. He had come to realize how often and thoroughly she had run his affairs while they lived in the same house; he did not wish to return to such a situation. He needed her to see that he was his own man, one who knew right from wrong and would act according to his own wishes. “Darcy attempted, when you spoke to him before, to introduce you to Mrs. Darcy. You will stand and allow him to do so.”

I clearly did not get far in this book before I knew exactly what I wanted to share with you for this post. LOL I’ve shared pictures of purple couches on Facebook, so I knew they existed. I just needed to find some. 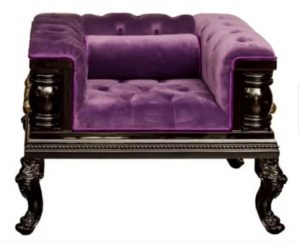 I started on Google, and this is the search results page. It is absolutely loaded with links to purple couches. At one point, I had a dozen tabs open on my browser, all right-clicked from this search page. 😀

One of the first links I clicked was this Wayfair page. Not everything on that page is purple. Wayfair apparently has a much broader sense of the color than I do. LOL Many of the options were too modern for my taste, even among the actual purple ones. In the end, I chose this settee as the one I would buy, if I could. The price is kind of high, but you’ll see later on why I’d go with this over some others.

The next site I checked out was Overstock. Among the delights I found on this site was this “single sofa”. Why we can’t call it a chair, I’ll never know, but it would fit the décor in my 110-year-old house, I think. As with Wayfair, there are a lot of modern options that I wouldn’t want.

The next site I looked at, albeit briefly, was elledecor.com. They had some nice options, but were priced WAY out of my range. LOL 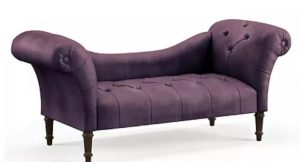 Macy’s had this chaise lounge I really liked. It looks like it might be comfortable, though I’d probably have to actually sit on it to know. It’s currently on sale, for nearly $2,000. Um, yeah, no, not right now. LOL

There were a bunch of other places’ websites I looked at, including Amazon’s. Some were super expensive, like Joss and Main, and others were not so much. I quickly became overwhelmed with the options.

I decided before I quit looking, to click on the image search. There’s a specific living room set I was hoping to find that I had seen on Facebook and shared. However, none of the images looked like that one, so I had to give it up. LOL

Which option do you like best? Do you prefer modern, or more historical looks, like Victorian or Early American?