DISCLAIMER: This post contains a single Amazon link. If you click on it, it costs you nothing, but may result in me earning a few pennies. The link is clearly marked.

This week’s Jane Austen item is something that used to be rather popular when I was a kid … postcards.

I started out, as I usually do, with a Google search. The results were about what I thought they’d be: lots of Etsy and Zazzle things. 🙂 I sort of randomly right-clicked on links and brought up some of the sites on other tabs, then went through them one by one. 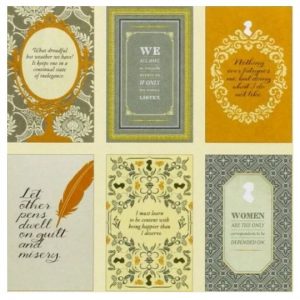 The first site I looked at was this New York Review of Books Reader’s Catalog. They have this set of one hundred post cards called “From the Desk of Jane Austen.” The post cards in the set each have one of twenty-five quotes from Jane and her books on them (each quote is in the set four times). They come in a nice little box, and look old-fashioned, like they come straight out of the Regency. They’re not overly expensive, and though I’m not really fond of the designs, I think they’d be worth the money. I actually should get some of these at some point, when I have some extra cash. This set is also available at Amazon. (affiliate link)

This Etsy shop has these postcards that are illustrations like out of a book. I like these ones. The store is UK-based, but since they don’t say they don’t ship overseas, I’d imagine they do.

Etsy has more. Some are bright and pretty and some are along the lines of what I already shared. 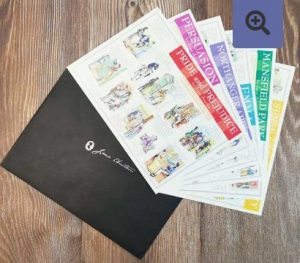 The Jane Austen Centre has some postcards, too. They have the same one hundred card set I mentioned above, and this set of six large postcards. Each is colorfully illustrated with scenes from one of Jane’s novels. One postcard represents each book. These big postcards are my favorites on this site. The Jane Austen Centre is also based in the UK, so what U.S. purchasers will pay will vary from what everyone else does. 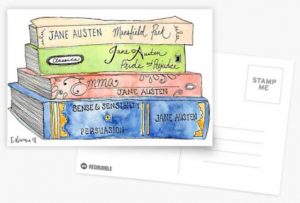 Redbubble, a site I’ve never heard of before I did this research, has Jane Austen post cards, as well. On this site, you can buy a single postcard, or many of them. They have a lot of choices, too. Too many choices, to be honest. LOL In the end, I decided on this postcard as one I’d be mostly likely to buy. It’s whimsical and cute and appeals the most to me. <3

Did you enjoy postcards when you were young? Which of the ones I shared today did you like the best?