I confess that after last week’s postcard write-up, I was not thrilled to be looking for greeting cards this week. I wondered what I had been thinking when I made this schedule. (As I recall, I made it during a race. Clearly, my attention was split. LOL)

However, when I actually began the search, I found myself being greatly diverted. <3 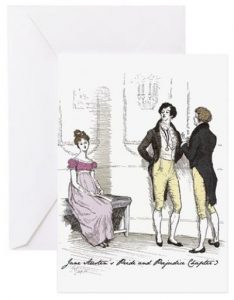 I began with Google, just like I always do.  The search results showed lots and lots of Jane Austen cards, though some were postcards and some were notecards. I actually had to dig a little deeper for this post.

CafePress is one of my favorite places, so I decided to examine their options first. There are some really creative cards here, and a wide variety of styles. Some are colorful, some are black and white; some have quotes from one of Austen’s books, and others have just a drawing. Not all are Pride & Prejudice, either. I see Emma and Sense and Sensibility in here, too. Some are Christmas cards, some birthday cards, and some seem to be generic greeting cards that can be used for any occasion. Most seem to be single cards, but a few come in packs of ten. My favorite card was this one. I’ve always liked Hugh Thompson’s illustrations of my favorite Austen book. <3 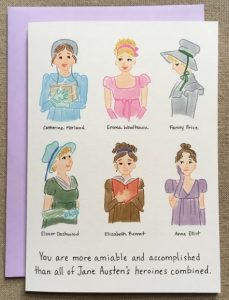 Next, I looked at Etsy, who has this large selection of cards and other Jane Austen items. There are a ton of creative people on that site, let me tell you! As with CafePress, there is a large range of kinds of cards and all the books are represented. My favorite is this heroines card. I like it because of the simple lines and the bright colors.

Then there’s this card, which has Colin Firth’s face on it. I have to wonder how much she paid to use his image. I’m surprised the cards don’t cost more. The only thing I can think of is that it didn’t constitute a copyright infringement because it’s a drawing of him instead of a photo. Not sure I’d risk it, personally, but this person doesn’t seem to mind, so … more power to her!

Next, I looked at this apparently single offering of a Jane Austen birthday card. The site is called Miss Bohemia’s Literary Gifts for Book Lovers. I like this card a lot, because it uses a Jane Austen handwriting font and an image of a Regency lady. I also love the colors and how feminine it looks. 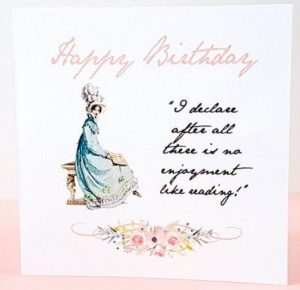 There were other sites, like Society6, that popped up in the search, but I thought these ones were a good representation of what’s out there. All of the cards were lovely, in my opinion, and in most cases, it was difficult to choose just one. This is another post that makes me wish I were independently wealthy with lots of discretionary income. I’d buy a bunch of stuff just to have for when things pop up. Can you imagine if I had a husband and he started questioning me about my purchases? LOL

Which card or cards did you like the best?