It’s hard to find pretty stationery for letter writing; most is designed for typed letters. It’s basically computer paper with a printed edging. :/

As we know, Jane Austen wrote a lot of letters. She wrote on plain paper and may have (I don’t know for certain, but I imagine she did) crossed lines to use up more of the blank spaces. Paper was so much more expensive in those days, and even the very wealthy might do that if their finances were tight and they had to retrench. As we go through today’s post, which is all about Jane Austen-themed stationery, I’ll try to find some that she might enjoy using. 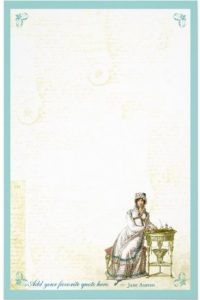 I started on Google, which brought back these results. I clicked three or four links and ended up disappointed. They were all stuff other than what I define as stationery, meaning they were journals and notecards and even calligraphy sets. So, I started looking at the image links at the top of the search results page, where I happily found what I was looking for (though in Etsy’s case, it took some extra work.)

I found two options on Zazzle. This first one is my favorite. I like it because it has a colorful border, an image in the bottom corner, and a Jane Austen quote. It’s not my favorite color scheme, but it’s very pretty. The other Zazzle option that was easy to find was this one. It’s rather plain, with just a small Hugh Thompson illustration and a quote in the top right corner. It’s not nearly as colorful, but since I said before that I enjoy the illustrations Hugh Thompson made, I would happily purchase and use this stationery. 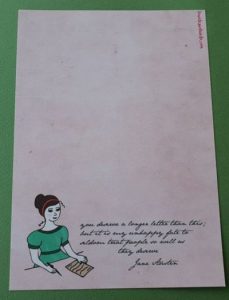 Now for Etsy. They have this option, which I love because the background is purple. LOL They have an apparently hand-drawn illustration at the bottom and a quote in Jane Austen font. It’s very cute and I’d love to write letters on it!

I looked at CafePress, but they had no stationery, only the journals, greeting cards, and notecards I mentioned above. So, I went back to Etsy for something I looked at but sort of dismissed.

One of the sellers on Etsy offers this set of graphics for people to use to make their own products. So, why not make your own stationery?

I actually was inspired in this idea by Leenie Brown, who, when I whined that everyone else defines stationery differently than me, started sharing links to actual stationery sets, with paper and matching envelopes. None were Austen-themed, but still. One of the items she shared with me was a digital download for purple “papers” that I can use to either make my own stationery with computer paper, or to use for backgrounds for Facebook cover images and stuff. 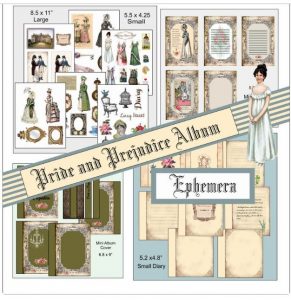 After I dismissed the Etsy digital download above, my brain circled back to it. Given the dearth of available stationery, I thought, why not include the download and encourage people to print their own stuff? I may give it a whirl, myself. I even looked up how to emboss paper after seeing one of the most beautiful flower-themed embossed stationeries I have ever found.

Before I go, I need to identify which item Jane Austen would maybe use, if she were with us today, to write her letters on. I think I’ll go with the one with the Hugh Thompson illustrations. My reason for choosing this set is that it’s kind of minimalistic. I don’t see Jane as being a hugely girly, everything-has-to-be-frilly kind of person. She was rather practical, I think, and the clean lines of that stationery might appeal to her very much.

Do you write letters? Have you ever made your own stationery?