Today’s purple post is brought to you by the following excerpt from Lilacs & Lavender, which was my second published book. 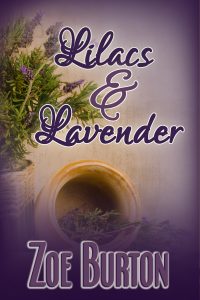 Elizabeth was to travel first to London, where she and her companions would stay with her Aunt and Uncle Gardiner for a night, then on to Kent. Sir William Lucas was eager to see his eldest daughter, Charlotte, well situated with her new husband. His younger daughter, Miss Maria Lucas, was to stay with the Collins’ as well, and Sir William would return home after jut a week.

They arrived at Gracechurch Street and Elizabeth’s Aunt and Uncle Gardiner and their children, as well as her dear sister Jane, were on hand to greet the party. After having some tea and some refreshments, the adults went out to do some shopping as a way to pass the day. Later they would be going to the theater.

That evening, as the group made their way into one of London’s most popular theaters, they came face to face with the one person they had least expected to see—Charles Bingley. Mr Bingley and Mr Darcy had been standing to one side of the lobby with Mr Hurst, waiting for Miss Bingley and Mrs Hurst. Whilst Mr Gardiner went to the window to purchase their tickets, the Gardiner party moved to the same side of the lobby in order to keep open the path to the door. Jane bumped into a gentleman, gently apologizing, when the man turned around with a gasp.

The two spoke at the same time, blushes covering their faces.

“How are you, Miss Bennet?” asked Mr Bingley.

“I am well, sir,” she responded softly. “May I introduce you and your party to the rest of mine?”

Seeing his nod, she began, “Sir William Lucas you know, of course, and his daughter, Miss Lucas.”

Bingley bowed to them both with a delighted smile on his face. “Indeed! It is so good to see you both!”

Smiling, Jane continued, “My aunt and uncle, Mr and Mrs Edward Gardiner. I have been staying with them since January.”

At this, Bingley startled, but quickly recovered himself, declaring that he was pleased to make their acquaintance.

Finally, Miss Bennet said as she gestured to her sister, “My sister you also know, of course.”

Bingley smiled at her, stating “Yes, I do. How have you been, Miss Elizabeth? It has been so long since I have seen my Hertfordshire friends. Why, it’s been more than three months! Not since the twenty-sixth of November, when we were all dancing together at Netherfield!”

“You are correct, sir.” Elizabeth smiled, then looked pointedly at her sister.

Bingley then performed introductions for his party before turning to his friend and asking, “I say, Darcy, is there not room enough for Miss Bennet’s party to join us in your box? Surely we can all squeeze quite comfortably together. What say you? And you, Mr Gardiner?”

Darcy jumped a little at being addressed, as his attention was entirely on Miss Elizabeth. “Yes, we can, what an excellent idea, Bingley!”

Being behind Mr Bingley, Mr Darcy was able to observe the onset of the encounter, including the look of absolute joy on Miss Bennet’s face and the quick change of her expression to one of sorrow. He was astounded. Miss Bingley had assured him that Miss Bennet had no feelings for her brother, but from what he had just seen, she most certainly did. Combined with the observations he had made of his friend this past week, he was certain he had made a grave error in any advice that separated the two.

All thoughts of his friend and Miss Bennet flew out of his head though the second he realized that beside Miss Bennet was the witty and vivacious Miss Elizabeth. Darcy was awestruck with the beautiful vision she presented in a light purple gown that fit her like a glove. He surreptitiously examined her figure, his eye drawn to the perfectly colored lilac blossoms woven into her hair, before looking into her eyes. What he saw there both astonished and excited him, giving him hope that had previously not existed.

This excerpt brought to mind curtains. You may wonder how I connected this scene to curtains; I read it and remembered there were curtains hanging in the theater. Technically, there still are, I think. LOL 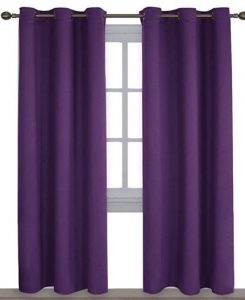 I love purple curtains. If I could, I’d have some in every room of my house, but I have yet to figure out how to manage that with all the various wallpapers going on. I do have some in the back three rooms of my upstairs. My bathroom has a pair of solid purple curtains that used to hang in the bedroom of the duplex I used to rent. I bought new, longer, light blocking (or maybe it’s room darkening, I don’t remember) solid purple curtains for the bedchamber here at Burton Cottage, and white and purple ones for the mistress’ study. I love my curtains! <3

Anyway, not all the ones I have are still available, and manufacturers come up with new ones all the time. So, I thought it a good idea to take another gander at them, and bring you with me. <3

I first searched Google, and this is the set of links I got in return. For whatever reason, the shopping options show up as stuff from the other side of the state. I think CenturyLink just routs my internet wherever, with no actual connection to my real location. <insert eyeroll>

Anyway, the first link below the ads is Amazon’s. I like the choices, for the most part. (affiliate link) 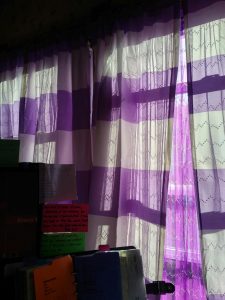 My office curtains with the purple sheers behind them. Click to view at Wal-Mart.

I’m not fond of sheers, ever, though I do have a set of purple ones in my study, behind the drapes. It makes life in town inconvenient to not have sheers, but I need light coming in when the curtains are open, know what I mean?

Living in the Snow Belt and so near a Great Lake, I do prefer thermal backing on my curtains. It is a big help in blocking the heat in the summer and the cold in the winter. With that in mind, I narrowed down the option on the first page of the search to this pair. (affiliate link) I chose this one because it was cheaper than the ombre set and came in the size I need. The first curtains I looked at on this page did not come long enough for my windows. The pair I chose has grommets for a fancy rod, but I’m sure would still work with my plain white ones. LOL

I looked at Wal-Mart next. This is the set of curtains I have in the mistress’ study. (affiliate link). I had to cut them off by a few inches, because the rod is not as high off the floor as those in the other rooms. I someday intend to make tie backs with the pieces I cut off.

I’m not sure which of the rest are the ones in my bedchamber. I got them at the store and don’t see anything that matches them in the search. 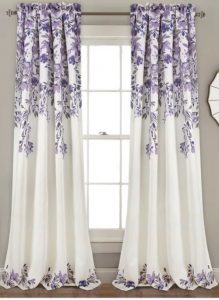 Overstock had lots of choices. Some were cool, some were just interesting, and some were absolutely lovely. In the end, I went with this set, which is, in my opinion, both cool and lovely. I really don’t have a room where they’d work, though, so I’ll just have to admire them and move on. LOL

Wayfair had the same set of curtains as above, plus more, as seen on this search results page. They had two or three ombre sets, and I liked this one the best. There’s just enough white at the top to set them off.

I really do wish I could have purple curtains hanging in every window, but I’ll have to learn to live without. Do you have a favorite color you’d like to decorate everything with? If so, which one?