I don’t know about you, but I love food. Not cooking it. Eating it. I hate cooking but I do love to eat. My crockpot is my favorite kitchen tool and I’m always on the lookout for quick and easy crockpot recipes. 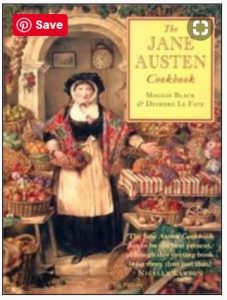 Lots of other folks enjoy cooking. There are Facebook groups dedicated to cooking all manner of things.  Stores are filled with cookbooks of all types.

We don’t really know a whole lot about Jane Austen, but we know she made breakfast for her mother and sister. She kept it simple, as I recall … mainly tea and toast. I don’t remember if she did any other cooking, but I’d not be surprised if she did. We all would like more information about this aspect of her life, don’t you think?

Today’s Jane Austen item is cookbooks. There are a few of these around, as this Google search shows. The one that appears most often is called, appropriately enough, The Jane Austen Cookbook. This 128-page cookbook offers authentic recipes recorded in a household diary by a lady named Martha Lloyd, who lived with the Austens for several years. This book can be found at the Jane Austen Centre site and at Amazon. (affiliate link) There is no Look Inside feature, which bums me out, because I wanted to take a gander at one of the recipes. The Jane Austen Centre lists six dishes that are featured in the book, including white soup. It also says the recipes are authentic but modernized. This is good, in my opinion, because I’d give up if it didn’t have precise measurements and modern ingredients. LOL 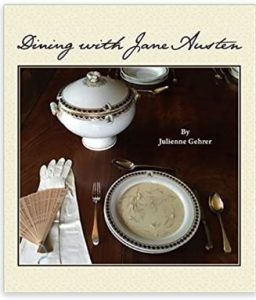 Amazon has another cookbook called Dining with Jane Austen Cookbook. The book can be found here. (affiliate link) It claims to have added the Knight family recipes to Martha Lloyd’s and includes pictures of recipes and completed food items. The pictures of the dishes were apparently taken at places Jane lived and ate meals. Like the recipes in the previous book, these have been adapted to modern times.

A third cookbook I found is called Dinner with Mr. Darcy: Recipes from Jane Austen’s Novels and Letters. This one intrigues me the most of the three. These recipes were inspired by dishes found, as the title says, in Jane’s books and in her letters. Remember how Bingley was going to send his cards around once there had been enough white soup made? White soup is one of the recipes in this book. Also, pease soup is mentioned in Jane’s letters. There’s a recipe for it. This book can be found on Amazon, but I closed the tab before realizing it and was too lazy to search the history for it. LOL So, here’s the link to the book on a site called Brain Pickings. 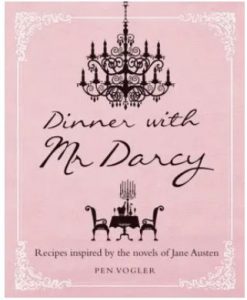 If I were going to buy a cookbook so I could eat some of the things Jane Austen ate, I’d definitely buy the last one. I think the title alone draws me and calls (quietly, because a lady never yells) to me to buy it.

Did you have a favorite? Which one, and why?