Believe it or not, Jane Austen pajamas exist. *grin*

I’ve no clue how I lit upon the idea of Austen pj’s, but there it is. LOL And, I did find some!

The Google search came up with a lot that was not what I’d searched for, at least in images. Apparently, the engine correlates the topic with long nightgowns. LOL There were a couple other places that showed up on page one of the results that had what I was looking for, though. 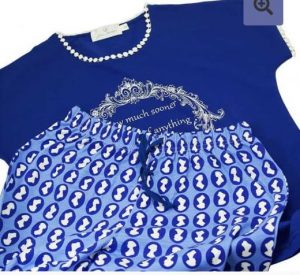 The Jane Austen Centre over in England has Jane Austen pajamas (spelled pyjamas over there) in two colors. This blue set is all they offer. They also have it in pink. The top has a quote on it … “How much sooner one tires of anything than of a book!” The bottoms are a light blue (or pink, depending on which set you buy) with Jane’s silhouette in white on a darker blue/pink oval. This is a repeating pattern, and since I know I did not explain that well, I’m including a picture. They only go up to XXL, so there’s no way they’ll fit me, even if shipping to the US was affordable. I’ll have to live without them, but I do love them!

CaféPress has lots of options. They’re all the same style, and most appear to be black and white, though I did see a pink one. Once you click on an individual item, you can see what other colors they come in. Good thing, because no one really wants to wear black pj’s all the time. Each set has a different image on the front. Some just have Jane’s signature across them. Some have quotes, or a quote and a quill, or some other cute artwork. My favorite is this pink Pemberley kitchen staff nightgown. Again, it doesn’t come in my size but I think it’s hilarious. <3 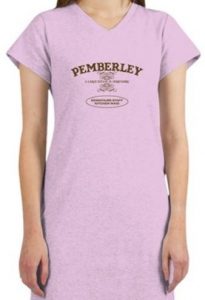 Etsy had some nightgowns that I adored that they are marketing as Austen-style nightgowns, but at $150 a pop, I said “heck to the no.” I can make one for a whole lot cheaper than that. I have skills, ya know. 😉

Amazon had some similar pj’s to what I saw on CafePress. This set with the pink camo bottoms (affiliate link) is rather cute. I think a lot of CafePress people also sell on Amazon.

This pair of pj’s would be better in purple camo, but I could deal with pink if they came in my size (which, of course, they don’t.) However, the saying is 100% accurate … I would rather be at Pemberley, or I would if it were real. Can we make it real? I need a vacation from the insanity in the world right now. LOL 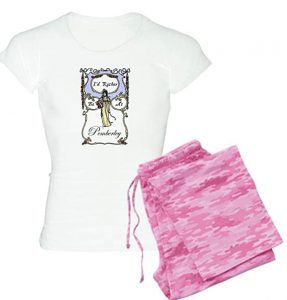 I did a quick Amazon search to see if they had more Austen pajamas, and found this gem … pink Darcy and “Lizzie” footed pj’s. They’re out of the middle sizes, but if you’re an X-small, a small, or a XX-large, this (affiliate link) is the item for you! They’re under $45, which is rather inexpensive for Austen-themed pj’s. I’d seriously wear these. <3