Disclaimer: Some of the links in this post are affiliate links. They cost you nothing to click on but might get a few pennies dropped in my pocket.

Today’s purple post is brought to you by the following excerpt from Mr. Darcy’s Love.

The two boys had grown up together at Pemberley. George was the son of the steward and Fitzwilliam was the heir. They were months apart in age, with Fitzwilliam being the older, and both had lost their mothers in their thirteenth year. Both received the same education, for the elder Mr. Darcy paid for George, who was his godson, to attend school as a way to reward his steward for his faithful service. It was not until that first year at Eton that George began to see a difference between himself and his friend. 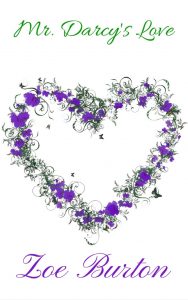 George’s mother, when she was alive, had been a spendthrift, and her son inherited that tendency. Living on Pemberley as he had, with free access to the kitchens and pretty much anything he wanted, his style of living was not that different than had he been Darcy’s son instead of Wickham’s. However, at Eton he was made painfully aware that he was nothing more than the offspring of the steward. He no longer had access to whatever he desired, and his charm, which had worked so well at Pemberley, no longer was as effective. It was pointed out by all and sundry that he was a servant, albeit a blessed one.

Fitzwilliam had done his best to shield him from the abuse he suffered as a result of his origins and to force his acceptance, but it was never enough. As the years of their schooling passed, the two grew apart, Wickham doing whatever was required to be accepted, ultimately becoming heavily involved in gambling, drinking, and consorting with the maids. Darcy, whose acceptance was guaranteed, withdrew more and more into himself and away from the pranks and carousing of his peers. By the time they entered Cambridge, their only connection was a tenuous one through Darcy’s father. Darcy stoically cleaned up Wickham’s messes during their university years, in order to preserve his family’s good name and his father’s fondness for his godson.

Darcy’s father passed within a year of his leaving University. Wickham’s followed a mere six months later. It was while he was at Pemberley for his father’s funeral that Wickham finally made application to Darcy for the legacy he knew his godfather had left him. His disappointment and anger were great when he discovered that other than one thousand pounds, the only other thing left him in the will was the gift of a living, the one at Kympton, near to Pemberley, and that only if he took Holy Orders. He refused the living, and charmed Darcy into giving him three thousand pounds in exchange. Telling his boyhood friend he was planning to study law, Wickham instead ran through the money in two years. When he heard the living was open, he wrote to Darcy asking for it, but Darcy refused. To avenge himself and get the money that he felt should be his, Wickham tried to convince Darcy’s younger sister, Georgiana, to elope with him.

The above scene is, of course, about Darcy and Wickham and how Darcy cleaned up Wickham’s messes. I began rereading this on Friday night, but it was Saturday morning during breakfast that I read this passage and the idea of purple playing cards struck me. 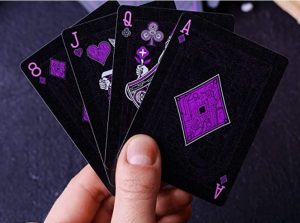 The color purple always excites me, and when I see lots of it all in one place, I become totally distracted. LOL

The first set I looked at was this set of purple Cyberpunk playing cards at Amazon. (affiliate link) They are the standard size and very colorful. I love them, despite the cyberpunk theme. I love the vibrancy of the purple on black. I also love the price. At $10, they’re a lot more expensive than I think a standard deck of cards should be, but they’re so unusual and so pretty that I’d be willing to pay more for them.

Amazon also has this set of purple Bicycle brand cards. (affiliate link) They are also very pretty, and are half the cost of the previous deck. They’re poker size cards. I had to go back and check and after some searching around, I can say that I believe “standard size” and “poker size” might be the same thing. Feel free to correct me if I’m wrong. 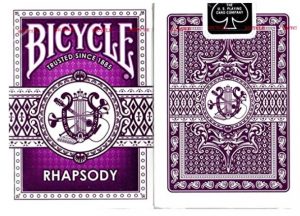 I was kind of excited to see these, because I had this idea, and I don’t know where I got it from, that Bicycle was no longer making playing cards. Regardless, I love them. <3

Zazzle also has playing cards. There are lots of designs, some all purple, some only partly purple, and all of them with different images.

I’m not much of a card player, other than Solitaire, and even that I play on a device nowadays, rather than with actual cards, but I thought it was fun to do this search. Do you play cards? Which design did you like best?