This week’s fun Jane Austen item is playing cards. We know from reading her works that card games of various kinds were popular, at least in the circles in which Jane Austen moved. We also know gentlemen’s clubs like White’s and Brooks were places men went to play card games now and again, and other clubs – also known as gaming hells – existed where fortunes were made and lost. 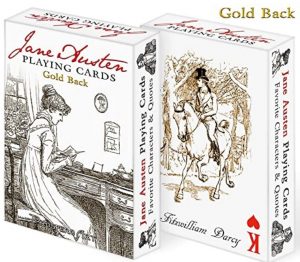 When I started my search for Jane Austen playing cards, I went to my friend, Google. I thought it was really cool that at the top of the page were links to videos and articles explaining how to play whist, speculation, and quadrille. I had to force myself to focus on my task. LOL

The first link I went to, which was the top link in the list, was this set of playing cards at Amazon. (affiliate link) I really like this set. Each card has a Jane Austen character or a quote. As near as I can tell, each Ace, Jack, King, and Queen has a character and the numbered cards have quotes. The backs of the cards are gold and white. Lucy Steele is a joker. LOL Fits her. 😉 Oh, and each suit represents a different novel. <3

I love this set, I truly do. The more I see of it, the more I love it! It’s pricey for a deck of cards but still under $10 before shipping and sales tax, so it’s not terrible. 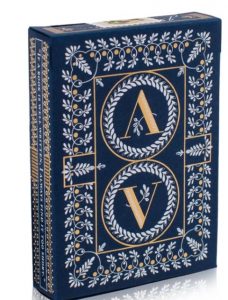 This same deck of cards can be found on the New York Review of Books Reader’s Catalog website, the Prospero Art website, and on Etsy. The price is comparable on all the sites I looked at, so it’s really a matter of deciding which store to support.

A website called Art of Play has a different set of Jane Austen playing cards. The description says the art for the cards was inspired by fashion plates from Ackerman’s Repository and from what I can see, they’re accurate representations. As with the other set, each suit of cards represents one of Austen’s novels. Cards with letters on them have characters from the respective books and numbered cards have old-fashioned looking spades or hearts or diamonds or clovers. (Yes, I know there’s another name for the clovers. I can’t remember it at the moment. *blush*) I like this set, but not as much as the other. This set is also $15.00, so it’s pricier. Still, it is a collector’s kind of item.

Amazon actually has a couple other sets of playing cards. One is a double deck set that’s similar to the one above. The other is a set of red cards with Jane’s image on the back of each card and book quotes on the fronts. I didn’t like the second as much, so I kind of turned my nose up at it. LOL