Today’s purple post is brought to you by the following excerpt from Darcy’s Predicament. 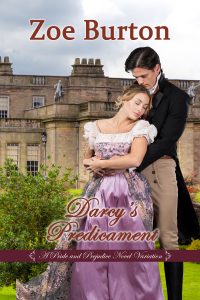 Darcy had just passed the haberdasher when he noticed his friend’s neighbour, Mrs. Bennet, leaning against the wall. He could see distress in her features. Tears made wide, wet tracks down her cheeks and he was certain he heard a gasp behind the hand she had pressed to her mouth.

Mrs. Bennet was not Darcy’s favourite person. She was loud and excitable, and talked about things that should not be spoken of in polite company. He thought about moving on, attending to his errand and forgetting he had seen the lady, but his training as a gentleman would not allow him to pass by any female in distress. So, with a sigh, he pulled Apollo to a stop and dismounted, tying the beast to a post and approaching Mrs. Bennet.

“Mrs. Bennet, may I be of some assistance?” The lady did not seem to hear him, but had her head cocked toward the doorway of the shop, listening to the conversation within. Darcy quieted as he began to make out the words. His eyes closed as the speech got worse and worse. No wonder the lady is so distraught, he thought. He pushed his handkerchief into her hand and remained silent beside her. When the voices faded, he turned to his companion.

Mrs. Bennet started when she felt Darcy’s fingers touch her. She looked up, her brow creased.

“Are you well? May I help you?” Darcy braced himself for a loud exclamation. He was shocked when all the matron did was whisper. 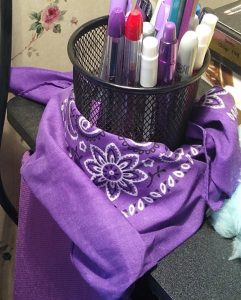 Mrs. Bennet has overheard some bad stuff about her girls, and Darcy has responded to her distress as a gentleman should, despite his dislike of the matron. We don’t know what color Darcy’s handkerchief was. We can assume it was white, but I don’t know enough about men’s kerchiefs back then to make a determination. But, what if it were purple? Hmmmm?

I honestly wasn’t sure I’d find purple handkerchiefs, but my Google search was happily well-populated. <3

I looked at Etsy first. There are some lovely options here, one of which is a purple bandana. I have one of those here in my office, but I really should buy more. Some of the handkerchiefs are not actually purple but have purple borders or monograms. Some have prints or embroidery on them that’s purple. Others are called pocket squares; these tend to come in different shades of purple. They also seem to be made of something other than cotton, like silk or microfiber. Nothing I can imagine blowing my nose on. 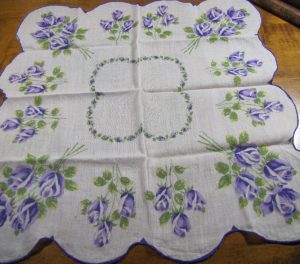 It’s often difficult to choose one single item on Etsy searches as my favorite, and this time was no exception. In the end, I went with this vintage handkerchief.  I love the scalloped edges, which are done in purple thread, and the purple roses printed on it. It’s girly without being frilly, which I love. It’s also old, and I’m fond of antiques. <3

EBay had a bunch of purple handkerchiefs for men. Most ended up being silk pocket squares in various patterns and shades of purple. My favorite ended up being a good old purple bandana. LOL

I was amazed to find Sears in my search results. I had thought they went out of business a year or two ago, but there they were. The Sears & Marketplace tab is the only place purple handkerchiefs show up, so I looked through what they had. As with Etsy, most were men’s pocket squares made of silk. In the end, I chose this floral patterned one as the one I liked the best. It’s silk but since I won’t be buying it and therefore will not have to blow my nose on it, it’s all good. 😉

So there you have it, purple hankies. What do you think?