Today’s purple post is brought to you by the following excerpt from Promises Kept. 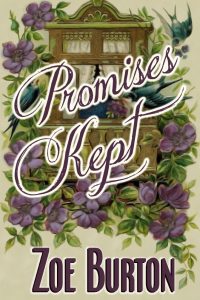 Entering the room alone, as Lady Matlock and the Viscountess were both occupied with other matters and could not accompany her, she saw that it was crowded with ladies doing as she was in preparation for leaving. Finally, as the room began to empty, she was able to take care of her needs before taking time to assess her appearance in the mirror provided for that. As she stood in front of the glass, thinking she must be the last to use it for the night, she was surprised to see two other young women entered, one blonde, one brunette. Seeing her, they approached.

“Well, what have we here?” sneered the blonde.

“Why, don’t you know, Cecilia, this is Mrs Darcy. She is the mouse from the country that forced Mr Fitzwilliam Darcy into marriage,” replied the brunette.

Speaking to Elizabeth, Cecilia said, “Indeed, I had heard that. What makes you think you will ever fit into our society?” Her voice began to carry a spiteful tone. “You are nothing, and you will never be anything, regardless of who you married. He will come to regret you, and it won’t take long.”

Suddenly, the woman reached out and yanked the curl laying on Elizabeth’s shoulder hard enough to make her cry out. “You do not belong, do you hear me?” She yanked again, eliciting another yelp of pain from her victim. “I plan to make your life miserable at every chance I get.”

The brunette laughed. Seeing Elizabeth’s mouth opening to retort, she slapped her. “There is no point in telling anyone about this, Mrs Darcy. No one will believe you. If anyone notices redness on your face, you will tell them you ran into the door. Do I make myself clear?” When her victim did not respond immediately, she slapped her again. Finally, after seeing Elizabeth nod, the pair laughed and exited the room.

Knowing that her family would soon come looking for her, Elizabeth did her best to soothe the redness left by the slaps. It was not possible to completely eradicate them, but she did hope no one noticed, least of all Fitzwilliam.

She was quiet as she joined her husband and his father in the foyer, accepting her coat and bonnet from the maid. Fitzwilliam looked at her closely, suspicion in his eyes. The remaining guests had already gone home, so she had no reason to be reticent. Perhaps she is tired, he thought. She did not turn to face him at all, and took his left arm instead of the one on the right that he had offered her. The Darcys each wished their hosts a good night, then left the house to enter their carriage for the short ride home.

Sitting beside her in the conveyance, Fitzwiliam was again struck by her silence. He put his arm around her, asking if she was well.

“Yes, I am well,” was her quiet response.

“I am not certain of that, Sweetheart. You are far too quiet.” He looked across the carriage to his father, but in the darkness could not see him. “We will speak more after we retire to our rooms.”

“Very well, husband.” Elizabeth knew that he now had suspicions that something happened while she was away from his side. She would do her best to put him off so she had time to think about what occurred, but knew it would not be long before he became insistent.

Arriving at Darcy House, they gave their coats to the maids that waited and climbed the stairs. Elizabeth entered the dressing room first to prepare for bed while her spouse waited, his valet helping him remove his topcoat. He then took off his waistcoat and shoes, handing them to the servant to clean and put away. He put his watch on the bedside table before pulling his shirt tail out of his trousers. He then grabbed a book from the stand and sat in the chair by the fire, waiting for his opportunity to use the dressing room.

He read for what felt like a long time before suddenly realizing that his wife was taking longer to get ready for bed than she usually did. Already alert to the fact that she was behaving totally out of character, he was more convinced than ever that something had happened in the ladies’ parlour. He tried to recall the ladies he had seen leaving that room while he waited for her to emerge. As he listed them all in his mind, he remembered two very young ladies leaving not long before Elizabeth. They were not remarkable young women. They were obviously in their first season, probably only a few months older than his wife. Their looks did not catch his eye, but then, only his beloved seemed to have that ability. What struck him was their laughter. They had giggled and carried on as though they knew some great secret no one else was privy to. Whatever was going on in his spouse’s mind had something to do with them, he was certain.

Finally Elizabeth entered the bedchamber, apologizing for taking so long. She climbed into the bed, extinguishing the candle on her side as he left the room. A few minutes later, he joined her in the bed, reaching out to draw her to his side.

Kissing her softly in the dim light, he asked, “How did you enjoy your first ball, Sweetheart?”

“Very well,” she answered quietly. “It was very tiring though. I am exhausted.” Her words were punctuated by a great yawn that felt like it was splitting her face.

“Yes, I am very tired, as well.” He paused. “Elizabeth, I know that something happened in the ladies’ parlour. I can read the clues in your demeanour and behaviour. I will not press you tonight, but tomorrow, we will discuss it. Do you agree?”

“Yes, Fitzwilliam. I love you.”

With a final kiss, the pair fell into a deep sleep, not to awaken until early afternoon the next day.

Chairs are common pieces of furniture, especially in books. They’re quite convenient to have nearby for our characters to fall into for whatever reason. Most chairs would not have reclined back in the Regency era. Instead, if one wanted to put their feet up, one would have pulled a stool or ottoman up to their chair and rested their feet on that.

In a bedroom, both back in the day and now, I always imagine comfortable, cushioned chairs. I have an office chair in mine, though these days I rarely sit in it. I’m rather fond of stuffed chairs, though, like the green recliner in my drawing room here at Burton Cottage.

Anyway, the above scene inspired me to look for purple chairs for Darcy’s bedchamber and mine. This was actually the second reference to chairs in the book; the first also struck me. When I saw there were at least two, I knew it should be my topic. LOL

A search of Google produced this page of results. There were a lot of results on this page, so I clicked the first five links to go through. As I looked at the chairs, I kind of mentally evaluated each. I wanted to choose one from each site that looked comfortable and was also clearly purple. I also stuck with the first page of results from each site, for time’s sake. 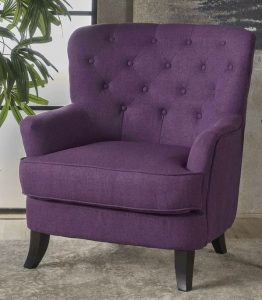 Wayfair’s link had a bunch of options, and of course, not all were purple. Many were more modern than I think fits my house, though of those, there were a few I really liked. There was a “light purple” (read: pink) chair that looked more retro than the rest, but I wasn’t thrilled with the color. In the end, it came down to two chairs that I’d choose. I know I should have picked just one, but I really like both and I’m of the philosophy that if you can’t decide between two, you should buy both. 😀 The two I chose were this barrel chair and this armchair. I think the armchair looks more like it would fit in a 100+ year old house, and more like what Darcy might sit in during the Regency era, but that barrel chair just looks real comfy.

Next up is Overstock. Their search results also showed more modern-looking chairs than older-looking ones. They included some prints as well as varying shades of purple and non-purple fabrics. I chose this armchair as my pick for Darcy. It’s not quite as fancy as I imagine one he’d sit in would be, but it looks like it would fit quite nicely in a Regency era home. In my mind, his chair has a higher back, though it does have those wing things at the top corners. 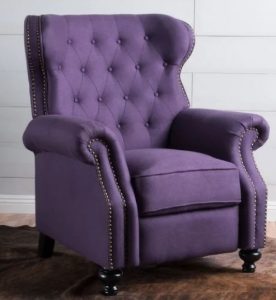 Next, we come to Amazon. Links in this paragraph are all affiliate links, just so you know. Here is the search results page. I’ll be honest: I wasn’t happy with what the Zon has on offer for this category. The choices I ended up with were a club chair and a recliner. I went with the recliner because sometimes to be comfortable, you have to be able to throw your leg over the arm of the chair, and I, for one, can’t do that in the club chair.

Oddly enough, Home Depot had a lot of chairs come up, though not all were purple. I always think of them as a hardware store, so to see them pop up in a search for chairs surprised me. LOL I’ll let you peruse that site on your own.

Another site you can take a gander at whenever you’ve a mind to is Wal-Mart. They had one or two that might work in Darcy’s homes.

So … which chair fits closest to what you have pictured in your mind for Our Dear Boy’s house?