Welcome back to Austen Promises! Here’s a link to the last post, in case you missed it. 🙂

Disclaimer: This post contains affiliate links. Clicking on them costs you nothing but may result in me earning a few pennies. Affiliate links are clearly marked.

Today’s purple post is brought to you by the following excerpt from Darcy’s Race to Love. 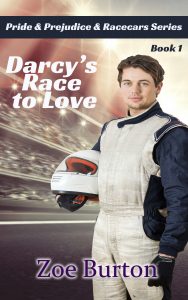 On the way out of the track, right before one entered the tunnel under turn one, Will stopped at the guard shack to let the man inside know that he was leaving and would return in a couple hours. The shift was changing, and the guard was distracted, resulting in him waving them off without much scrutiny. Shaking his head, Will pulled into the short tunnel. Coming out the other end, he looked at Liz when she gasped.

Will braked as he stared. “It is. What in the world?”

Liz grabbed his arm. “That’s him! Will, that man hugging your sister is the guy I saw earlier!”

Instantly, Will’s heart rate jumped, his face turning red from the adrenaline and extra blood flowing in his veins. “That’s George Wickham,” he ground out as he whipped his truck in beside the other man’s. Slamming the transmission lever into “park,” he jumped out and headed around the front. Wickham, realizing who Will was, let go of Georgie, intending to get in his car and go. He was not fast enough, for when Will saw Wickham start to move, he sprinted the final few feet, tackling the man who touched his sister.

Georgie, not understanding what was happening, screamed when she felt someone rush past her and saw her date hit the ground. When her brother stood, hauling Wickham up with him, her fear turned to anger. “Will Darcy! What are you doing?”

Slamming Wickham back against the side of his car, Will ground out, “I’m giving this man a reminder of what my father told him.”

Shaking her off, he half-turned, keeping Wickham pinned with one arm. “What are you doing out, Sis? I distinctly heard Coach tell you to stay in the motorhome. How did you get past Aunt Audra?”

Georgie refused at that point to speak any further. Not trusting her to stay put while Wickham was dealt with, Will entreated Liz to sit in his truck with her, a request Liz enthusiastically agreed to. As she led his sister away, Will dialed his phone with one hand. “Dad? I just caught Georgie on the other side of the tunnel, with George Wickham.”

Charles, Jane, and the third couple, Teddy “TJ” Jackson and his girlfriend SueAnne Pilson, who had by now arrived on the scene, could hear the roar of Coach’s voice coming through Will’s phone.

“Georgie is with Liz in my truck, and I have Wickham pinned to the side of his car. Charles and TJ are here; if I have trouble, I trust them to back me up.” There was a pause as Coach said something else. “Yes, sir. We’ll wait for you.” Hanging up the phone, he said to his prisoner, “Well, George, you did it this time.”

It didn’t take long for Coach to come roaring up in his SUV, with a security guard following him on foot at a run, cell phone to his ear. Bursting out of the vehicle with his poker buddies on his heels, he first stopped at Will’s truck to speak to his daughter.

“What did you think you were doing, young lady?” When Georgie merely glared at him, Coach continued. “I ought to turn you over my knee and give you the paddling you so richly deserve. But I won’t. I don’t know what I’m going to do with you, but for now, you can consider yourself well and truly grounded. No cell phone, no driving privileges, and no free roaming of the track. As a matter of fact, for the foreseeable future, you will remain at home with Mrs. Reynolds. If anyone can keep your disobedient backside in line, she can.” Over the sound of Georgie’s protest, Coach slammed the door.

George Wickham quivered visibly as his former employer approached. To hear the man berate his beloved daughter was a shock, and George knew Coach would be even harder on him.

Cell phones actually play a big part in this story. Liz is a social media marketer, and her cell phone is a big part of her job. Also, Will texts Liz a lot from the moment they meet. In the scene we just read, Georgie loses her phone privileges because she snuck out with Wickham, or tried to. 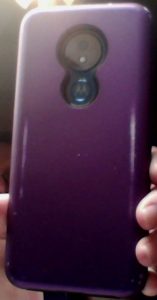 My phone cover. Click to view on Amazon. (affiliate link)

I don’t know anyone nowadays who does not protect their cell phone with a cell phone case. Phones are very expensive, many running into the thousand dollar range. An investment like that needs taken care of, so most of us buy cell phone cases. Since I have a purple one, I thought I could share with you some of the cases available in purple for some of the phones on the market.

I always buy a purple case for my phone. Sometimes I have to wait to get one when I get a new phone, because money can be tight and Verizon never has fun cases for the phones I buy. (I adore Blackberries, though last October, I had to go with an Android. I made the poor decision to go with a Mogo G7 Power. Terrible phone … don’t buy one.)

Anyway, this past March I finally got a purple cover for my waste of space phone. This cover from Amazon (affiliate link) is what is currently on my phone. It’s a far better cover than the thing deserves, to be honest, but it was relatively inexpensive and has survived the last several months with little more than some dings and two places the purple has worn off. 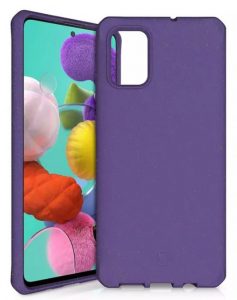 Target has a bunch of cell phone covers in purple, for many different phones. As with most stores, they have a lot of iPhone covers. They also have one for Samsung Galaxy phones and at least one for a Google Pixel phone. This case ended up being my favorite, because of the shade of purple.

Etsy offers phone cases, too. I honestly never considered this website for a phone cover, but maybe I should have. There are a lot of choices, some more attractive than others to my eye. I stuck to the first page, to limit overwhelm, and from the cases there, I chose this amethyst crystal case. I like this one because of the color (obviously) but also because I like the idea of using pieces of rock in my phone case. Makes me feel like it’s indestructible, ya know? LOL

In case you’d like to check out other options, this is the Google search results page I used.