In a post from several months ago, I talked about marketing. I thought this might be an opportune time to revisit that topic, since my last book, Darcy’s Surprise Betrothal, sold far better than any previous one. 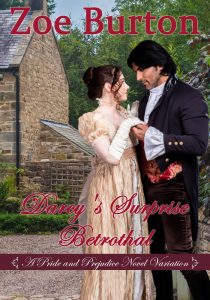 Here’s what I did, first and foremost, and I know that I have mentioned this before: I gave it a cover that screamed Regency (i.e., it was genre-appropriate.) I’m convinced that this is the biggest factor in its success. Of course, it had excellent editing, and I slaved over the corrections. I also agonized over the blurb. I remember whining to Leenie that blurbs used to be easy, before the JAFF market was flooded with new authors. 🙂

Those were the basic steps to promoting this book. They’re essential, really, for all books. But, was that all it took for the book to be successful? Did anything else matter?

Well, I don’t know, and I’m not going to “test” to find out. Instead, I’ll copy what I did, as far as I can remember a month later.

Funds for advertising have been limited, so I chose this time to advertise mostly for free. This meant posting often on my Facebook profile and page, and in both my reader’s group, Burton’s Babes, and in the group I created with Leenie and Rose, Longbourn Literary Society. Then, I took a list of groups that allow self-promotion, and I posted in two or three groups a day for the first week. I let it ride on the weekend, posting nothing, then made a meme with an image of an Amazon review of the book on it, and made the rounds of those same groups again.

I did boost two posts on Facebook: my initial post, which contained my Gumroad link (I think) and an Amazon link the first week; and the post I made on my page with the review. Of those two, the first week got a few more impressions, clicks, and reactions than the second, but not many. Combined, I spent $40. Not bad, really.

Another thing I did to promote myself was to submit the book to a Regency newsletter. I have forgotten which one now, so I never even saw it “in print” but I did submit it. 🙂

I gave away copies of the book, too. I dropped a Bookfunnel link in Burton’s Babes for ten copies, first-come, first-served, and did the same for my newsletter. 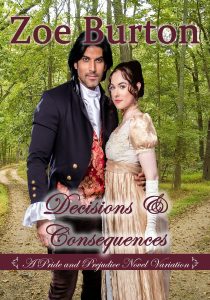 I did no blog tour. I have only done one or two in my career, though I have been on a few blogs as one-offs. I did a tour, if I recall correctly, when I released Decisions & Consequences, and that’s the only book that has done better than this one in my entire career. I’m considering doing a tour for the next book, though there will only be probably three or four blogs that I approach, and one or two I plan to assiduously avoid. There’s no point in sending a book to someone to review who does not like books written in my style. I’d rather not waste my time and energy or the blogger’s time and energy.

Besides a blog tour, what do I intend to mimic for my next release? I think spreading out my promos in Facebook groups was a good strategy. With the way Facebook hides things, I think there was a bigger chance of people seeing at least one of my posts when I spread them out. I hope to boost at least one of the posts.

I might do a preorder this time, and offer that link and my Gumroad link to my newsletter subscribers. I will also give away books like I did with Betrothal.

I think I’ll also submit the book to more than just one Regency newsletter. And this time, I’ll pay attention to which ones! 😉

Of course, it should go without saying that the new book, To Save Elizabeth, will have a genre-appropriate cover and a strong blurb, as well as good editing.

I think with this plan in place, it will be relatively easy to replicate my astoundingly good numbers from Betrothal, don’t you?