Today’s purple thing was inspired by the following excerpt from Matches Made at Netherfield, in which I wondered if Darcy would ever consider wearing a purple tux to a ball. 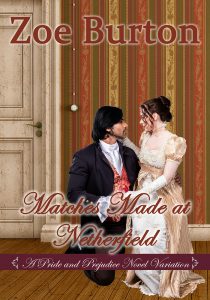 The night of the ball finally arrived. After four days of rain, during which the ladies of Longbourn could not even stroll the gardens, much less walk to town to purchase ribbons and shoe roses, the Bennet girls were eager to get out of the house. The entire family bundled themselves into the carriage, with much fussing, pushing, and shoving.

The family was among the first of the guests to arrive. Mrs. Bennet was certain that the ball was intended for Mr. Bingley to show his preference for her eldest daughter, and nothing else would do than that they enter the house first so she could set herself up in the best position to monitor Jane and Bingley, and hold court over her friends.

The entire Netherfield party was waiting to receive the guests. As usual when they were in the same vicinity, Bingley’s attention seemed to be focused solely on Jane. Caroline was eventually forced to nudge him to gain his attention, recalling him to his position as host. Regretfully, he let her pass down the line.

Caroline was perfectly polite, if less than warm, to Jane, but to the rest of the family, she was barely civil, and when it was time to greet Elizabeth, she could not bring herself to do more than nod her head. Her desire to host this event had diminished in direct proportion to her anger at not being asked to dance by the target of her matrimonial hopes. In the days since her discovery that his first set was spoken for, Mr. Darcy had remained silent on the subject of a dance with her. It followed, therefore, that this lack on his part led directly to more serious plotting on Caroline’s to force a proposal. She had planned every detail, and, now that the ball was starting, she would put her scheme into action.

For Darcy, who hated social occasions in general, and being on display in specific, the receiving line was torture. While he thought the residents of the Meryton area were pleasant enough people, they had no class, and their country manners often grated on him. They expected him to make small talk, and were offended when he chose not to. He was aware of the general opinion held about him, that he had a tendency toward arrogance. It irritated him, but he did not feel the need to justify himself to people of so little consequence in the world. The only pleasant part of this duty he was now performing was the smile of Miss Elizabeth Bennet. He took her hand when she approached, bowing low over it. When she was directly before him, it was easy to forget her poor connections and lack of fortune, for she shone like a polished jewel.

“Miss Elizabeth. I am delighted to have you join us. I am eagerly awaiting our dance.”

Elizabeth tilted her head and examined his face. “I will own to a bit of surprise to hear it. Until you asked for the set, I had thought you disliked me. I cannot read your expressions well enough to decide if you are sincere or not, so I will simply thank you for the honor of asking me and let it go. So, thank you, Mr. Darcy. I greatly enjoy dancing, and I am certain to enjoy ours.”

Darcy smiled at her forthrightness. It was one of the things he liked about her: she was direct, with no artifice. “Until later, then.” He watched as she walked away, turning to greet Miss Mary and the rest of her sisters, and then more of the guests.

I began my search on Google again, and this is the page of results. The images looked promising, so I scrolled down and began opening links.

The first link I looked at was Perfect Tux. This page shows purple tuxes and accessories, including waistcoats and ties. They have lots of purple shades to choose from, and none were boring to look at. This tux with a floral jacket was the only full tuxedo I saw. I love the lavender, but the flower pattern on the jacket doesn’t thrill me. It’s not ugly by any means, just not what I pictured in my mind as something Darcy might consent to wearing. If the flower pattern was in the waistcoat and the jacket was solid lavender, I think he might give it consideration. To be honest, though, the Darcy in my head is not a dandy, so I’m just not sure he’d wear it.

Men’s USA is the next site I looked at. As with the previous website, there are more than just purple tuxes on this search results page. There are more variations here, such as a purple paisley jacket, velvet jackets, and this tuxedo vested suit. Technically, it’s not a tux, I guess, but I can see Darcy consenting to wearing it, because it’s not flashy. It’s got white trim which draws attention, but in a more subtle way than a flower-patterned jacket.

Suit USA even had purple dress shoes on their search results page. Those I loved. LOL They also had mostly jackets, but this suit stuck out to me. The purple is much brighter than the Men’s USA one, though the styling is similar as far as white trim goes. The reason I think Darcy might accept this suit is the silver/gray waistcoat and white shirt. I think that adds enough class to the outfit that he’d be able to bear wearing it. 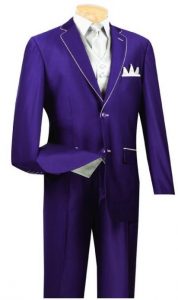 Amazingly enough, Amazon was a disappointment. Their search page (affiliate link) showed mostly stuff for little boys. As a matter of fact, everything I saw on the page was for boys. None for men. Darcy is disappointed. 😉 LOL

Which tux do you think Darcy would wear?