Today’s purple post was inspired by the following excerpt from Darcy’s Caution, book three in my Pride and Prejudice and Racecars series. 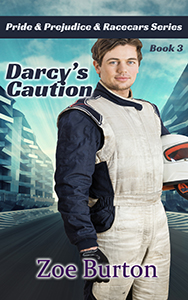 Three hours later, after a successful set-up and final practice, Will led Jeff Black into the motorhome. Liz had just finished her second conference call and was closing her laptop.

“Very well, actually. I think I have two very happy clients.” Liz looked over Will’s shoulder at their guest.

Will took the hint and, straightening, made the introductions. “Liz, this is Jeff Black. He’s one of the reporters you called back in January. Jeff, this is my wife, Liz.”

Liz leaned over the table to shake Jeff’s hand. “It’s so nice to meet you, finally! It’s sometimes hard to believe that two people can be at the same racetracks week after week and never see each other.”

“I agree,” Jeff laughed. “I’ve seen you around, though, zipping through the garage on that golf cart. I try to stay out of your road.”

“She loves that thing.” Will chuckled at Jeff’s joke. “I’ve threatened a time or two to put a governor on it.”

Liz rolled her eyes. “I think I’ll leave now. You can make jokes about my speed or lack thereof out of my hearing.” She sniffed, picked up her laptop and folders, and winked at Jeff before kissing her husband and walking to the back of the motorhome.

I have a bit of a fascination with golf carts. It’s perhaps not so surprising, given my love of cars. LOL This is one of the reasons I gave a cart to Liz in this series of books. I’d love to own one, and maybe someday I will, a purple one, of course. Let’s see what I can find for purple golf carts.

I did a Google search to begin. At first glance, the results seem to show that all purple golf carts are the same shade of purple, but maybe with a deeper dig, we’ll find others. 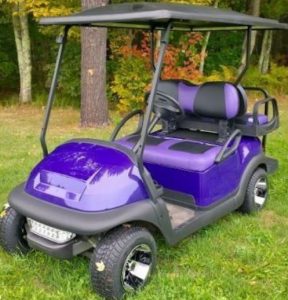 The first link I clicked was for a site called Kingston’s Karts. They have this purple cart for $5,999, used. It’s got some cool features, like a back seat that folds out for hauling stuff (or injured friends LOL.) There are some upgrades you can purchase, as well, like a lift kit (YES, please!!!) and a storage cover.

The next cart I looked at was this one at Southern Sportz’s site. It’s about the same shade of purple but has differences. I love the wheels on this one, though I’m not a fan of the skinny tires. This cart also has headlights, which the first did not. The site says it has purple and green front seats, but they look purple and black to me. It has a set of purple gauges on the dash, which made my heart sing. <3 There’s no back seat to this one. It’s hard to see, at least for me, but it looks like there’s a small storage bin back there. This one would set me back $7,340.

This cart at King of Carts is pretty cool. It’s also used, but it has a combination of new and used parts. It has off-white seats that the site calls beige, and a single headlight. There is a back seat on this one. The description calls it a flip seat, so it must flip down like the one did on the first cart I looked at. It has cup holders, as well, which I didn’t notice on the other carts. Also, I love the beefy tires. <3 If those seats were purple, this one would be my favorite. The price on this one is marked $5,579. 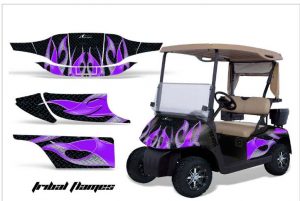 In the original search page, I saw a cart with flames on it, and was intrigued. The Nationwide Power Sports page has this set of graphics that can be used to make a non-purple cart, purple. You have to know the year of your cart, because the graphics are made to order, but at $274.95, it’s a great way to make an existing cart awesome. <3

So, if I had to choose one of the carts, I think I’d go with the first one, as long as I could get a lift kit.

Do you have a golf cart, or ever driven one? Which of the ones I shared here did you like the best?