This week’s purple post was inspired by the following excerpt from Darcy’s Secret Marriage. 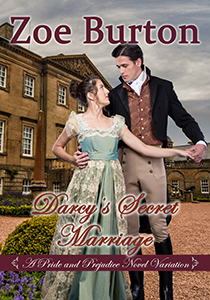 Elizabeth stood beside her aunt, Maddie Gardiner, as she observed the dancers.  Her party had been the last to arrive at the ball, and she had not yet been asked to dance.

Elizabeth and her aunt and uncle were in Scotland on a leisure trip, though her uncle, Edward Gardiner, was using part of the trip for business purposes. They were guests of one of Gardiner’s investors, a Mr. Gerald Reid, and were staying at his estate nearby.

Maddie shook her head as she saw Elizabeth rise up on her toes to examine the guests. “Do you still do that? Search crowds? It has been a long time.”

Elizabeth dropped back to her heels, turning to face her aunt. “I do still look. And, yes, it has been a long time.” Elizabeth felt her face turn red and her body begin to burn. She opened her fan and waved it to cool herself off as her eyes began to search again.

Maddie did not speak for a moment, a small crease forming between her brows as she examined her niece. Finally, she asked, “You have never told me for whom you are looking. Is it someone in particular?”

Elizabeth sighed. She had not told her aunt of her lost love. Only her sister Jane really knew how she had felt that long ago summer when she had fallen madly in love. Though she trusted her aunt, the pain of her disappointment was still sharp after all this time. She moved her gaze from the dancers to meet Maddie’s.

“Yes, there is a specific person for whom I search.” Elizabeth was hesitant to say more, for fear of being rude, but she needed her aunt to understand that she did not wish to speak of it, at least not here and now. Drawing a deep breath and letting it out in a soft sigh, she added, “I … cannot … at present tell you who it is.” Her lips quirked up in a flash of a smile. “Perhaps one day I will be able to speak of it to you.”

Maddie examined Elizabeth once more, but said nothing beyond, “Very well.” She gave her niece a reassuring smile and then watched as Elizabeth’s eyes moved back toward the dance floor.

Elizabeth was relieved that Maddie had left off so easily. She suspected that there would be more questions at a later date, but that would work in her favor, for it gave her time to compose her responses and her emotions.

The end of the set of dances arrived, and the music stopped. As the crowd departed the dance floor in favor of refreshments and conversation, Elizabeth’s heart stopped as she recognized a gentleman on the other side of the room. “Fitzwilliam,” she whispered. Her attention riveted to the man across the way, she froze, willing him to come near.

Darcy knew the moment Elizabeth recognized him by the way her whole face lit up, a smile entirely covering its lower half. He began to move toward her, an answering grin spreading over his own mien. He skirted around a couple who stopped in front of him, impeding his progress, but paid them no mind. Finally, he was there, standing in front of her. He bowed.

“Miss Bennet, how are you?” I have missed you, you are beautiful, I love you.

Elizabeth blushed even as her smile grew. She curtseyed gracefully, saying, “I am well, Mr. Darcy. How are you?” Oh, how much more handsome you are! I did not know it was possible. I love you so! 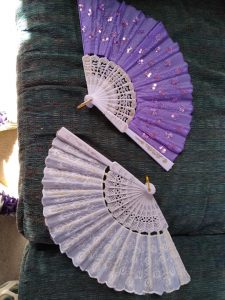 I was first introduced to fans like Elizabeth’s when I was young. I remember seeing them at a church we attended at some point. I don’t recall if it was a long-term thing or a single visit, but those fans stick out in my mind to this day. They did not fold and were about as big as a dinner plate. And, they were beige in color.

Many years later, I was married and began attending a church that met in an old school building. The air conditioning wasn’t the greatest, and my spiritual Mom, Judy, gave me a lace and plastic fan to use. To this day, I keep it in my “Bible bag” and use it at church.

A couple years ago, I was in Pittsburgh at a luncheon in a hotel conference room with a couple dozen other authors, and it was hot in there. The wife of an author over by the window sent her husband up to their room; he came back and offered me one of three. I chose the one with the purple in it. LOL I keep this fan in my big purse. 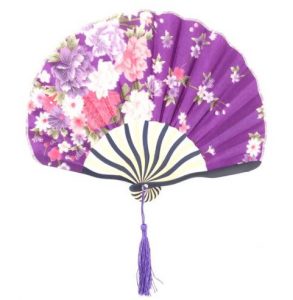 Anyway, I began this search at Google. This is the search results page. Most of the results were electric or battery-operated fans, and I almost used the images search instead, but with a few clicks, I did find some paper and lace/plastic hand fans.

Wal-Mart showed me these results. If you scroll down, you’ll see some hand fans and at least one hand fan pouch. LOL There are maybe half a dozen fans on the first page and a couple more on page two. There’s a really cool one made of purple feathers, but it’s $20 and that’s more than I’d be willing to pay, I think.

Of the rest, I chose this fan as the one I liked the best. There’s at least one more that’s similar, but I like the layout of the flowers on the purple background the best on this one.

Next, I looked at Oriental Trading Company. This is a great place for party favors and things to use in classrooms and stuff. The search results at first were not promising.  Then, I found this set of fans, and they led me to what I really wanted, which was this set. They’re cheap paper and metal, and I doubt they’d last long, but they’re a gorgeous dark purple. 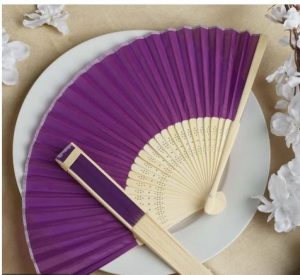 For this last fan, I’m almost positive I clicked on an image across the top of the initial search page. The Tablecloths Factory site has this gorgeous bamboo and lavender silk hand fan. They also come in darker purple. They’re even more inexpensive than Oriental Trading, but they claim to be durable. Either way, they’re gorgeous!

Have you ever used hand fans? I think they’re wonderful … do you agree, or do you prefer another method of cooling yourself? Which of these did you like best?