Clicking on some of the links will take you to Amazon. I am an Amazon affiliate and while clicking the links won’t cost you anything, it might give me a small payment.

Today, I’ll start us with an excerpt from The Essence of Love, the book that made me think of purple chess sets. 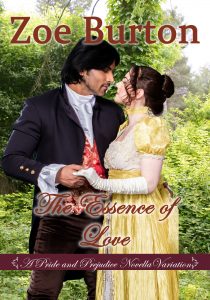 Darcy dismissed his valet, Mr. Smith, and climbed into his large, empty bed. His thoughts were full of Miss Elizabeth Bennet, as they had been since he first laid eyes on her at Arthur Place.

Never had he been so captivated by a woman. He had been master of his family’s estate for five years, taking the reins at the death of his father. At every turn after that—even before then, if he were honest—he had been pursued by many women. He had danced with hundreds of them, but none had held his attention for longer than a set. Miss Bennet, however, had. He mentally listed her good qualities: she was vivacious, good humored, intelligent, accomplished on the pianoforte, had expanded her mind by extensive reading, spoke and read French, and read Latin and Greek. She played chess, and was able to hold her own in a debate. Her opinions were well thought out. Beyond her mind, her person was attractive, as well. Her figure was light and pleasing, and her eyes were expressive. There was none of the bored debutante about her, with cold eyes and blank looks. She exuded warmth, and it drew him to her like a bee to a flower.

Darcy turned his mind to her connections and circumstances. Her aunt and uncle were peers, and that was in her favor. It was unfortunate that her mother’s family was from trade, but he had learned long ago not to judge a person based on his position in society.

It was also unfortunate that she had so little by way of a dowry. While he did not know the exact figure, Lord Watts had told him that the Bennet sisters would have equal shares in their mother’s portion after her death, and that was all. Their father had not saved to add to that amount. Of course, Darcy was wealthy enough that it did not matter much to him; his concern was his family’s reaction. While he did not cater to their whims, wants, or desires, and would marry whomever he chose without regard for their opinion, he did not want his future wife to be treated poorly because she was not from the same circles. I shall have to make it plain to them, should I choose Miss Bennet, that she is to be treated with the same accord they would have treated my mother, had she lived. And I am almost certain I shall eventually offer for her; she is everything I have looked for in a wife. With those pleasant thoughts, Darcy drifted off to sleep, a smile on his face.

One of the things Darcy likes about Elizabeth in this excerpt is that she plays chess. She’s not a stupid, brainless woman. Of all the females who had chased him over the course of his adulthood, she fascinated him the most. <3 *sigh*

When I read this passage, I thought, “Hmmm … I wonder if anyone makes purple chess pieces.” Well guess what … they do! <3

I started with a Google search. This link will take you to the results page. Some of the ones in the images made my eyes hurt. LOL They’re like neon purple and pink!

This search was not as easy as some I’ve done. In some cases, only one piece out of a whole set was purple. Then, it took me a minute to realize that there are chess pieces for two players, and both are probably not going to be purple (though I don’t see why they can’t be two shades of purple … like royal purple and violet or lavender.) With that said …

EBay has several different sets, it seems, some of which are also for sale in other places. A couple of the sets there are black and white pieces with a purple and white board. I like that a lot! 🙂

The Chess Store has this half-set in purple. At $3.99, it’s not a bad price. You could buy it and whenever someone challenges you to a game, you can whip them out and inform the challenger you have your own pieces to play with! LOL

There’s a place called The Chess House that has two similar purple chess sets that are very different in price. As near as I can tell, the one set has better-quality pieces. This is the less-expensive set and this is the pricier one. Both are purple and pink. Pink enough to blow out your eyeballs. You’ve been warned. 😉

Of course, Amazon has some, too. (affiliate link) Many are similar to the ones I’ve linked above. What I liked about this search was this set of purple pawns. <3 (affiliate link) Apparently, they can be used for more than just chess. LOL